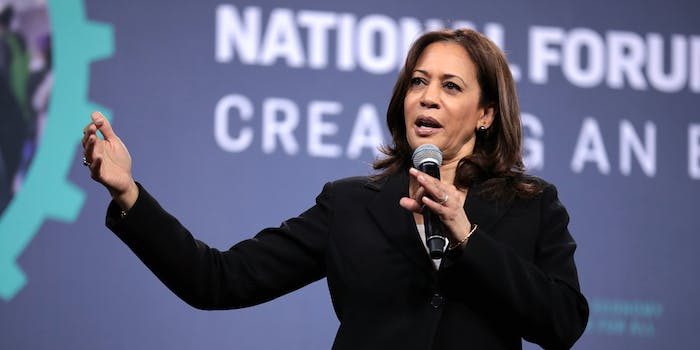 Kamala Harris unveils her version of Medicare for All

The plan did get some criticism.

Sen. Kamala Harris (D-Calif.), a 2020 Democratic presidential hopeful, unveiled a Medicare for All plan that stops short of other, more sweeping healthcare plans from her 2020 rivals.

Harris, who announced her plan in a post on Medium, leaves an option for private healthcare insurers to offer Medicare plans that “adhere to strict Medicare requirements on costs and benefits.”

“This would function similar to how private Medicare plans work today, which cover about a third of Medicare seniors, and operate within the Medicare system,” Harris’s post on Medium reads. “Medicare will set the rules of the road for these plans, including price and quality, and private insurance companies will play by those rules, not the other way around.”

The plan also calls for allowing Americans to opt into Medicare immediately, and a 10-year phase-in period for expanding the Medicare system where infants and uninsured people would be automatically put into the new system and other people have an option to opt-in to it.

Last month, the California lawmaker tried to clarify her stance on health insurance after she appeared to support abolishing private insurance during the second round of the first 2020 Democratic debate.

The day after the debate, Harris said she thought the question was whether or not she would give up her own private insurance for a public option and that she did not believe “private insurance should be eliminated in this country.”

“Let’s take a popular, good government-run program. Add a lot more privatization and profit-seeking into it. What could go wrong?” Faiz Shakir, a campaign manager for Sanders, wrote on Twitter. “Apparently we would have wait 10 years (!!) before judging health care outcomes or assessing the taxpayer costs.”

Let's take a popular, good government-run program. Add a lot more privatization and profit-seeking into it. What could go wrong?

Apparently we would have wait 10 years (!!) before judging health care outcomes or assessing the taxpayer costs. https://t.co/h8c2Y521Zc

As Axios points out, Sanders plan would have a four-year phase-in and would eliminate private insurance.

Harris will participate in the second round of the second Democratic presidential debate on Wednesday night, facing off against former Vice President Joe Biden, Sen. Cory Booker (D-N.J.), and others.