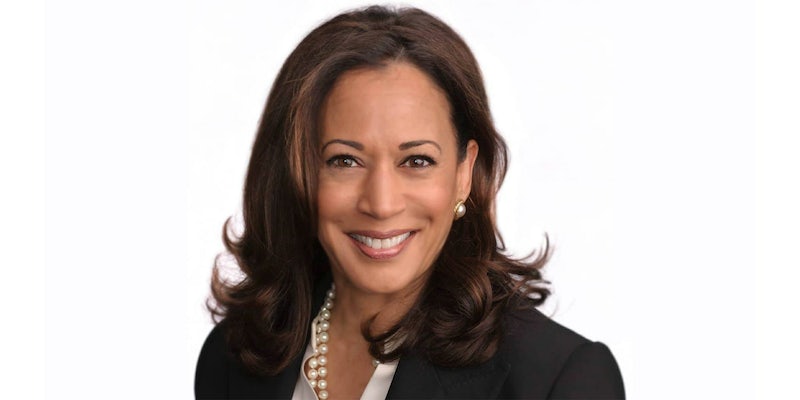 Kamala Harris is running for president in 2020

She's young, but she may be ready.

If you aren’t already familiar with Kamala Harris, the 53-year-old Californian senator with a talent for aggressive interrogation, you probably will be soon—she’s one of the Democrats’ front-runners in their hope to unseat Trump in 2020.

And on Jan. 21, she made it somewhat official. In a video posted to her Twitter account, Harris announced she was seeking the presidency.

I'm running for president. Let's do this together. Join us: https://t.co/9KwgFlgZHA pic.twitter.com/otf2ez7t1p

In her announcement, Harris said the values we cherish like “truth” and “justice” are “all on the line now.”

Harris plans to launch her campaign with a speech in Oakland on Sunday, Jan. 27.

Kamala Harris 2020: Everything we know so far

Elected in 2016, Kamala Harris is new to Washington. This means that she has been a senator for less than two years. Prior to coming to D.C., she was the state attorney general in California, a position that she assumed in 2011, becoming was the first woman to fill the role, according to her website.

Harris’ bio also boasts her status as only the second African-American woman elected to the U.S. Senate.

Why people believe in Kamala Harris 2020

The first-term senator has enjoyed a meteoric rise since ascending to the upper chamber. And her presence on the Senate Intelligence Committee is an undeniable factor in her transition to a household name. The committee has been investigating possible ties between Trump’s 2016 campaign, Russian actors and the subsequent must-watch hearings.

Attorney General Jeff Sessions was brought before the committee for a hearing in June of 2017. In a moment that made for brilliant televison, Harris hit him with a series of questions that left the former Alabama senator flustered. At one point, Sessions even blurted out “I’m not able to be rushed this fast. It makes me nervous.”

In May, during CIA Director Gina Haspel’s confirmation hearing, Harris put her experience as a former prosecutor on display. She repeatedly asked Haspel if waterboarding and other torture tactics were immoral. And again, when Mark Zuckerberg appeared before the Senate, he caught himself stuttering before Harris. The Los Angeles Times’ clip of Harris questioning Sessions boasts nearly 2.9 million views on Facebook. On her page, that same interaction (taken from a Late Show clip) has just under 2.5 million views.

Harris also made highlight reels when she interrogated future Supreme Court Justice Brett Kavanaugh over his conversations with lawyers close to President Trump.

Frequent talk show appearances have also boosted her visibility. In the past few months, she has appeared on Ellen and The Late Show with Stephen Colbert. Ellen even asked Harris if the senator will run in 2020, but the politician declined to answer. Instread, she offered a textbook answer for a presidential hopeful, outlining her policy agenda. “I’ve seen so many people focus on that thing out there and trip on this thing right here,” she added. That line is one of her current talking points—she repeated it on the hugely popular morning radio show, The Breakfast Club.

There are a number of other obvious accomplishments Harris has under her belt that make her a popular candidate. As a fundraiser, she’s proved a dominant force, raising over $3 million for Senate Democrats, according to a McClatchy report from mid-April. And while the progressive and old-guard branches of the party may differ on policy, they are both happy to endorse a huge money-maker.

Additionally, Harris gave a rousing speech to the massive crowd at the Women’s March. Her remarks were peppered with stirring calls-to-action like “we are tired as women of being relegated to simply being thought of as a particular constituency or demographic.” She’s put together an online army, forking over $1.2 million to Revolution Messaging—the firm that turned Bernie Sanders into an internet sensation.

She’s also made good political moves while on Capitol Hill. Only a few months into her tenure, she crossed the aisle to work with Republican Senate colleague Rand Paul  (R-Ky.) on a criminal justice bill. Every presidential candidate constantly boasts that they’re willing to work across the aisle. For Harris, the ability to cite moments when she’s made that move previously is a huge point in her favor.

What people are saying about Kamala Harris 2020

The presidential race is still in the somewhat distant future. But, understandably, people are already jittery about Harris’ run.

A top GOP source told the Washington Examiner that she’s considered a serious contender, explaining “She’s smart, cautious, has strong ties to law enforcement and a minority.” And she was recently attacked as a “DC elite” by RNC spokeswoman Taryn Fenske, and that recognition is another sign that the Republicans are worried about her. Still, it’s difficult to make that attack stick since Harris has only been on Capitol Hill since January.

While many of the possible names (like Sanders, Biden, Warren) for the Democrats’ 2020 ticket are grey-haired, Harris is still very young. Top Democratic fundraiser, Michael Kempner, described Harris to US News as “charismatic, smart, and impressive.” He added that she has “that extra quality that you can’t necessarily pinpoint, but it has the feeling of a star in the making. Everyone looks for the new, new thing. Kamala is the new, new thing.”

Now she gets to prove it.