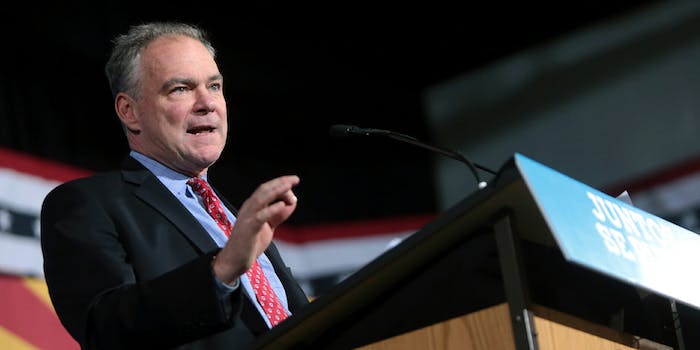 Sen. Tim Kaine (D-Va.) has asked for the release of a memo that reportedly outlines the war powers President Donald Trump believes he has, according to a new report.

Kaine, the vice presidential nominee in the 2016 election, asked for the seven-page memo in a letter sent to Secretary of State Rex Tillerson, NBC News reports.

The memo seems to be part of Kaine’s request that the Trump administration justify the bombing ordered in Syria last year after President Bashar al-Assad used chemical weapons on civilians.

There is “urgency” to obtain the memo as Trump continues to use harsh rhetoric regarding North Korea, NBC News reported.

“The fact that there is a lengthy memo with a more detailed legal justification that has not been shared with Congress, or the American public, is unacceptable,” he wrote to Tillerson in the letter. “I am also concerned that this legal justification may now become precedent for additional executive unilateral military action, including this week’s U.S. airstrikes in Syria against pro-Assad forces or even an extremely risky ‘bloody nose’ strike against North Korea.”

The Justice Department declined to comment for NBC’s report.

Trump’s has made several hostile remarks against North Korea in the past several months. Last year the president said the country would be met with “fire and fury” if it continued nuclear tests. He has also threatened to “totally destroy” North Korea. Early last month Trump also tweeted that his “nuclear button” was “bigger and more powerful” than the one North Korean leader Kim Jong-un had.