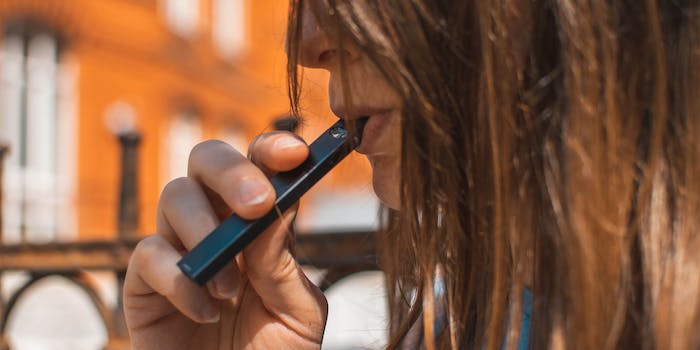 Report: Juul knew teens would become addicted to its products

A new study from Reuters' Investigative team reveals that Juul executives knew its e-cigarette products would hook young users from the start.

A new report from Reuters’ investigative team reveals that Juul executives knew its e-cigarette products would hook young users from the start.

The highly popular cigarette alternative, which launched in 2015, uses a liquid nicotine formula that combines nicotine with organic acids and artificial flavors in what Juul calls “nicotine salts” to give the product a smooth taste, allowing users to take a deeper inhale than traditional nicotine products.

According to Reuters, this new nicotine product is what made Juul take off, hooking teens and other users “who otherwise would never have smoked cigarettes, according to interviews with more than a dozen tobacco researchers, pediatricians.”

While concerns over youth use of Juul products started nearly soon as the product hit the market, it wasn’t until 2018 that Juul, after receiving public criticism, announced it would start trying to curb youth sales. The Juul ads started featuring older models, and the online stores bumped their minimum age to 21 from 18. In 2019 Juul was pressured by state regulators to stop selling the fruit, creme, mango, and cucumber flavored nicotine pods that critics of the company said appealed to children.

But according to former Juul scientist Chenyue Xing, the company knew the product could become dangerously addictive before it was even released to the public. After developing the nicotine formula, Juul experimented with technology that would shut the e-cigarette off after so many hits in order to prevent users from consuming too much nicotine. Ultimately, the company decided against employing any time of technology.

“You hope that they get what they want, and they stop,” Xing told Reuters. “We didn’t want to introduce a new product with a stronger addictive power.”

An unnamed former manager at Juul told Reuters that the concerns about the risk of youth addiction just weren’t strong enough to outweigh the company’s growth.

“Clearly, people internally had an issue with it,” the manager told Reuters. “But a lot of people had no problem with 500 percent year-over-year growth.”

According to Reuters, Juul knew that a young consumer base could be beneficial. “It was well-known that young customers were ‘the most profitable segment in the history of the tobacco industry’ because research shows that nicotine users who start as teenagers are the most likely to become lifelong addicts.

Last month, concerns over the product increased when several people ended up in the hospital with a mystery lung illness related to vaping. According to the Center for Disease Control, as of Nov. 5, 2,051 cases of lung injury and 39 deaths connected to e-cigarette products have been reported.

A representative from Juul has yet to return our request for comment.