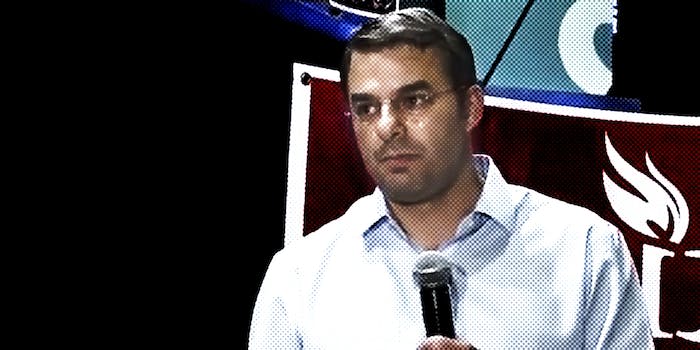 “To Brian Ellis, you owe my family and this community an apology for your disgusting, despicable smear campaign,” Amash said in his victory speech of of the would-be Representative. “You had the audacity to try to call me today after running a campaign that was called the nastiest in the country.”

“I ran for office to stop people like you,” he added.

Ostensibly, that’s a reference to the fact that he’s one of the most vocal critics of the National Security Agency in the House, even authoring a bill to defund the NSA‘s phone record collection program soon after former NSA systems analyst Edward Snowden made proof of the once-secret program public.

But many, including Amash himself, saw that as veiled race-baiting, a nod toward Amash’s heritage.

“I’m an Arab-American, and he has the audacity to say I’m Al Qaeda‘s best friend in Congress. That’s pretty disgusting, and he owes us an apology,”  Amash told local news station Fox 17.

To former Michigan congressman Pete Hoekstra, who campaigned for Ellis by claiming Amash was “pro-abortion”—both candidates described themselves as pro-life—Amash had even stronger words.

“You are a disgrace,” Amash told a cheering crowd. “I’m glad we could hand you one more loss before you fade into total obscurity and irrelevance.”