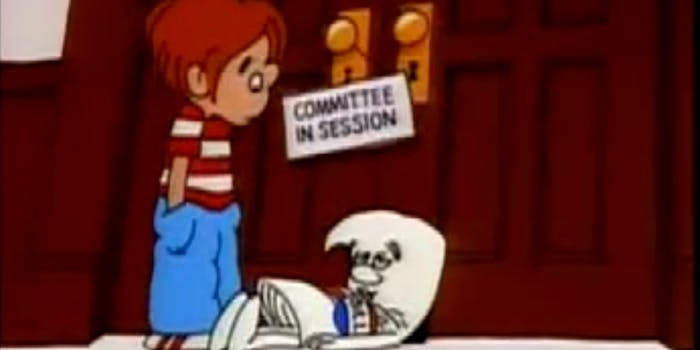 "Texas Special Session Blues (I'm Just a Bill Remix)" takes aim at controversial legislation that would ban abortions after 20 weeks and shut down the majority of Texas's abortion clinics.

Since the ‘70s, the Schoolhouse Rock! song “I’m Just a Bill” has taught kids (and adults) how a bill becomes a law. Of course, it’s been parodied before, but over the weekend, a YouTube user by the name of “Bad Bill” introduced his own timely version of the song.

Titled “Texas Special Session Blues (I’m Just a Bill Remix),” it takes aim at controversial legislation that would ban abortions after 20 weeks, shut down the majority of Texas’s abortion clinics, and require that procedures must be done at ambulatory surgical centers.

Bad Bill keeps the funky melody and original animation but adds his own lyrics, illustrating why this piece of legislation is dangerous and what its fate could be. Gov. Rick Perry called for a special session, which started July 1, to pass the bill. Last week, the renamed House Bill 2 passed via the State Affairs Committee. Today, the bill is back in the Senate for another public hearing, after Wendy Davis’s June 25 filibuster stalled the Senate vote.

Would another filibuster work to derail it a second time? Don’t count on it, says the animated bill:

Boy: You mean if Wendy Davis filibusters again, we can keep you from becoming a law?

Bill: Not likely. And don’t count on a veto. You see, right-wing politicians everywhere are coming up with new ways to wage war on women. This could go to the U.S. Congress and even back to the Supreme Court. I thought we worked this shit out years ago!

This bill is coming on the heels of other equally invasive abortion legislation in Ohio, Wisconsin, and North Carolina, which adds some distressing irony to the original version.