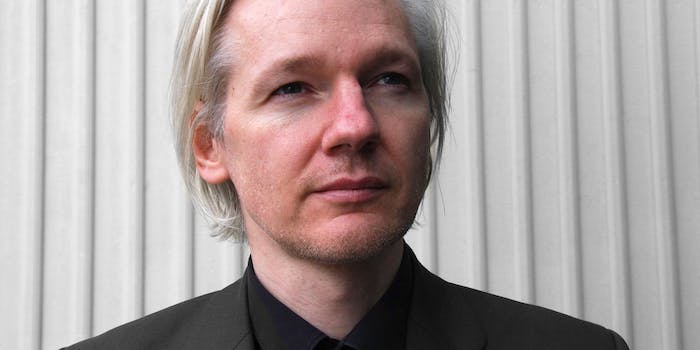 You can lunch with WikiLeaks founder Julian Assange for $50,000

There's a catch: You have to promise not to tell anyone what happened.

VIP charity event Charitybuzz is now offering the chance to bid on a lunch with the WikiLeaks founder at the Ecuadorian embassy in London, where he’s made his home for the past few years. Things the lucky successful bidder can do include talking with Assange, eating alongside him, and letting him give you tips on how to better secure your laptop and phone.

The auction, which really does have a recommended $50,000 price tag, is for a good cause, of course. Proceeds from the auction benefit Arms Around the Child, which supports children in need around the world.

There is some fine print, however. I’m ineligible even if I found an extra $50,000 laying around, as all members of the media are disqualified. And you need Mr. Assange’s approval to take photos or bring in any electronic devices with you (which might make his assessment of your phone purely theoretical).

You’re even supposed to get his permission to write about the experience afterward, though it’s not quite clear how he’d enforce that one from the confines of his embassy. If somehow you place the winning bid and he won’t let you write about your time with him, try submitting the account to WikiLeaks. They’re supposed to be good at getting secrets out.

Photo via Espen Moe/Flickr (CC BY 2.0) | Remix by Jason Reed