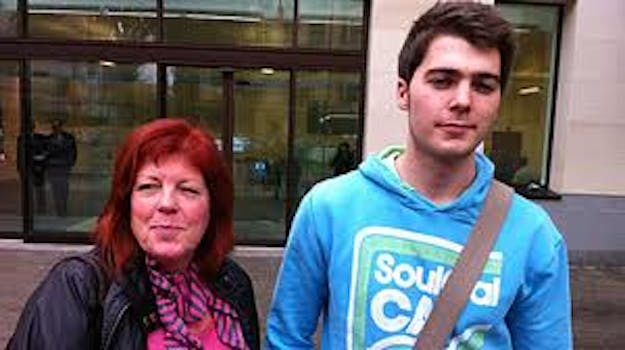 Julia O'Dwyer has taken to the Internet to fight for her son's freedom.  Richard O'Dwyer if facing extradition from England to the United States on charges of copyright infringement.

The police had come to her door in Derbyshire, England, looking for her son, Richard, then a 22-year-old college student. He was accused of running a website that had made him hundreds of thousands of dollars, but, they claimed, violated copyright laws.

They were “looking for Mr Big & trappings of wealth,” she told the Daily Dot. But they “were a bit let down, as the staircase was ripped out that day, so they needed a ladder to get to Rich’s room.”

The same day, London police did find Richard at his university in Sheffield. They brought him in and interrogated him for a little over half an hour about his site, TVShack, which linked to streams of pirated TV shows and movies—much of it copyrighted by the Motion Picture Association of America. He insisted to them that his site was no more than a search engine, that though his site might point to illegal streams, he’d never uploaded or hosted copyrighted material.

Her son’s case took a turn for the worse six months later on May 23rd, when Julia and her son went to London to answer bail. The criminal investigation was being dropped in the UK, the Solicitor told her. But the news was not good.

Instead, he received a much more damning charge: extradition to the United States for violating American copyrighted materials. They were sent immediately to the City of Westminster Magistrates Court, where Richard was taken away in handcuffs.

She asked him if he was OK. “He said he was, but he looked in shock,” she said.

Richard spent the night in jail and surrendered his passport. He posted £3000 for bail and was released the next morning to continue his studies until his hearing.

Julia knew in her heart that her son was the victim of gross incompetence and injustice from the courts but she wasn’t sure how to fight. But when “people kept asking me if we had a campaign website,” she responded with a blog, which she titled “Extradition: the fight of our lives.”

She has used it to keep people updated on the case—and to keep her own record straight.

Her first post was her memory of that November, peppered with additional information, like that during the interrogation, Richard “answered all questions but was upset and tearful during this interview—something I found out only nine months later when I requested the transcript of the Police interview.”

Since then, she’s devoted herself to Richard’s cause, largely by increasing her online presence.

Her blog posts range from short updates to heartfelt pleas.

After a Magistrate ruled against her on January 13, she went home and wrote a blog post titled “Disastrous Day at Westminster Magistrates.”

“I could tell what was coming as the Judge read through his ruling which by the way is still full of inaccuracies which have already been highlighted at various earlier hearings. Basically he could not think outside of extradition box and did not have the technical brains to understand the evidence put forward, despite our efforts to simplify with diagrams and a video tutorial.”

In June, she also started a Twitter account. She’s active there as well—her account shows she’s tweeted 26,619 times, usually linking to stories about copyright or infringement cases or retweeting support for Richard.

Answering emails, trying to research laws, and getting Richard’s story out into the world “has completely taken over my life.”

A divorced mother of two—Richard’s younger sister lives at home—advocating her son’s case “is a full time job.” Julia has also taken a lot of sick leave from her job as a children’s nurse.

That decision was “expected,” though, Julia said. Now it’s time for appeal. Richard, she says, is trying to live a normal student life until his next court date.

“He’s on a work placement this year,” she said, working on an app development company, “so no real studies.” His friends help keep him distracted and humble: he “doesn’t like the limelight over this,” she said.

She considers fighting for Richard her duty as a mother, saying he needs to finish his education and “wouldn’t have a clue about what needs to be done,” anyway.

“I think the world needs to be aware of the danger facing Internet user. Be aware that US laws are not the same as their own countries laws.

“It is a terrifying experience.”