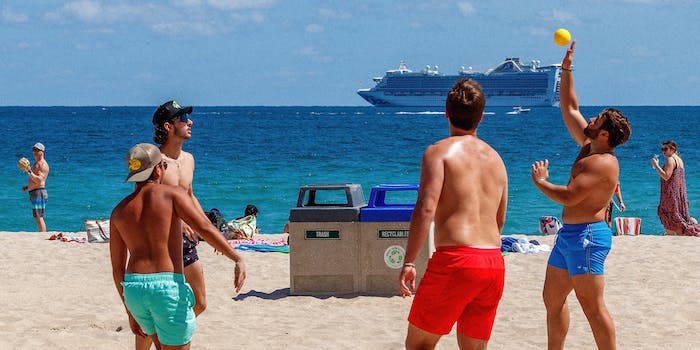 A photo of a crowded beach from 2019 has resurfaced following a chaotic weekend in Miami Beach.

MSNBC’s Joy-Ann Reid helped amplify fake news on Sunday related to the chaotic events that unfolded over the weekend in Florida.

Reid quote-tweeted an image that purported to show a massive crowd in Miami Beach, comparing the group to a “microscopic image of a petrie dish.”

Miami Beach Mayor Dan Gelber on Saturday declared a state of emergency and set an 8pm curfew after the city was overwhelmed by spring break travelers.

The huge and mostly-maskless crowd, which police later dispersed with chemical irritants, raised concerns among local officials given the ongoing coronavirus pandemic.

The image in question was originally shared by Fernand R. Amandi, who, like Reid, works for MSNBC.

But the photo Reid helped spread wasn’t taken on Saturday. In fact, it was even taken this year or during the pandemic.

As noted by journalist Siraj Hashmi, the image appears to have been taken in 2019.

Daniel Dale, a fact-checker for CNN, also pointed out the photo’s actual origins.

Dale further notes that Amandi eventually shared another tweet in which he admitted that the photo was old. But Amandi’s retraction has been shared less than 100 times, while his original tweet, which was not deleted, has been shared well over 3,000 times.

In his retraction, Amandi also appeared to justify incorrectly portraying the image as current.

“It has come to my attention that the picture in the original tweet is not from this week, but that does not change the fact that Miami Beach has been overrun by thousands of maskless Spring Breakers who are not abiding by the CDC pandemic guidelines as these other photos confirm,” Amandi said.

The Miami Beach City Commission announced on Sunday that the 8pm curfew would remain in effect for Thursday through Sunday until the end of the month.