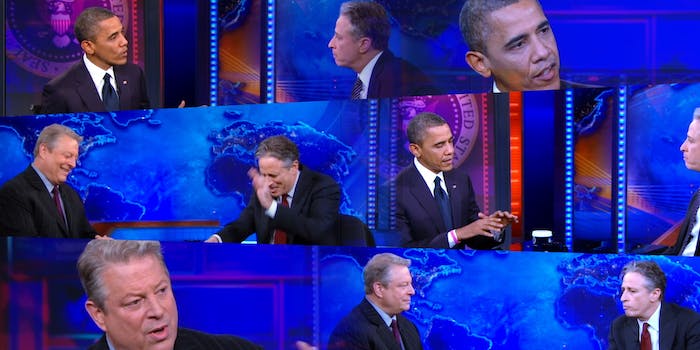 He skewered American politics for 16 years. Here are some of his best high-profile chats.

Americans, millennials, the civic-minded with a sense of humor, and everyone in between are all rightfully wringing their hands at the news that beloved Daily Show host Jon Stewart will retire later this year.

All but the stodgiest viewers have long accepted that just because Stewart has joke writers and a live, laughing audience, that doesn’t mean his content is any less serious than the network newscasts. Now that he is heading for the door, it’s worth remembering that he has put tough questions to some of the most important American political figures during his 16 years as Daily Show host.

Many of these interviews are split into multiple segments. We encourage you to click through to see the full conversations.

This video isn’t embeddable, but you can watch it here.

This video isn’t embeddable, but you can watch it here.

Images via The Daily Show | Illustration by Max Fleishman