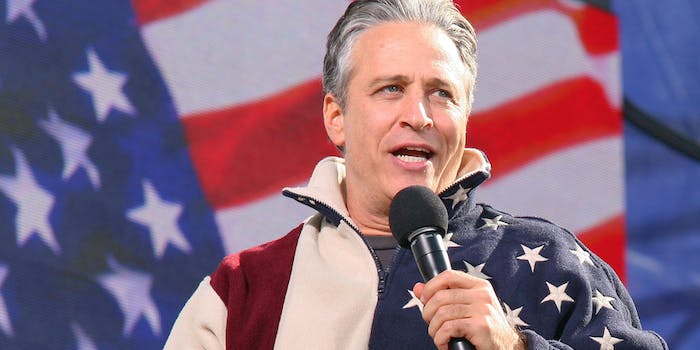 The Internet wants Jon Stewart to moderate a 2016 presidential debate

Will the former 'Daily Show' host help make this happen?

Former Daily Show host Jon Stewart just wants to kick back and relax after 16 long years of making America laugh. But a growing number of Americans wants him to come back and play the straight man during one of the 2016 presidential debates.

More than 82,000 people have signed a Change.org petition that seeks to make Stewart the moderator of one of the three debates between the Republican and Democratic nominees.

“Over the last 16 years, Jon Stewart has played an influential and iconic role in covering U.S. politics and media,” wrote the petition’s creator, a Stanhope, New Jersey, resident whose Change.org username is M. Waters. “We believe he should continue that tradition as a moderator at one of the 2016 Presidential Debates.”

“Over the last 16 years, Jon Stewart has played an influential and iconic role in covering U.S. politics and media.”

The petition points out that Stewart has interviewed dozens of members of Congress, Cabinet members, and heads of state, and that he has won Peabody Awards for covering two presidential elections.

“I know this petition can make a difference,” M. Waters wrote. “In 2012, three concerned high school students started a petition on Change.org asking the Commission on Presidential Debates to select a female moderator for a presidential debate. It garnered over 180,000 signatures, and won!”

The survey pointed to a recent Reuters/Ipsos poll showing that Stewart outperformed all other political pundits on the question of trust. The Pew Research Center’s collection of “key facts about how his program has made its imprint on journalism” further bolster the case that Stewart is a public intellectual worthy of the debate moderator’s table.

Stewart’s agent did not respond to a request for comment about the petition. Calls to the Commission on Presidential Debates on Thursday morning went unanswered.