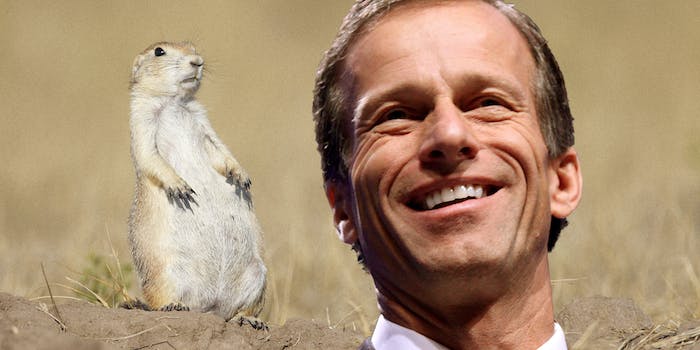 The mass school shooting in Uvalde, Texas late last month reignited debate about reforming gun laws. Many are calling to re-ban assault-style rifles like the AR-15 the Uvalde shooter used in an effort to reduce the carnage. The previous ban on such weapons expired in 2004.

On Tuesday, Senate Minority Whip John Thune (R-S.D.) presented a somewhat novel argument for keeping AR-15s on the market. He said that people in his state use these weapons, which he described as a “sporting rifle,” to shoot varmints such as prairie dogs.

“And so I think there are legitimate reasons why people would want to have them,” he added, speaking to a CNN reporter.

Prairie dogs are small rodents roughly a foot long that weigh between two and four pounds, per National Geographic.

An AR-15 is a high-capacity rifle that fires bullets at such a high velocity that it creates a cavity with an exit wound that can be the size of a grapefruit.

While it is legal to hunt prairie dogs, and some people do eat them, many feel that using an AR-15 is quite literally overkill.

However, the use of AR-15s to hunt vermin has been brought up before, most famously online when a man argued and went viral for saying he needed one to kill “30-50 feral hogs.”

“Sounds as if people in South Dakota, including John Thune, need some serious target practice,” tweeted one.

Many people simply made fun of Thune.

“As everyone knows, the only way to kill a prairie dog is to turn it into a fine cologne,” @jaredlipof tweeted sarcastically.

In the midst of the mockery over Thune suggesting that AR-15s are simply sporting rifles for hunting rodents, some more serious commenters noted that many mass shooters have used the weapon to carry out their crimes.