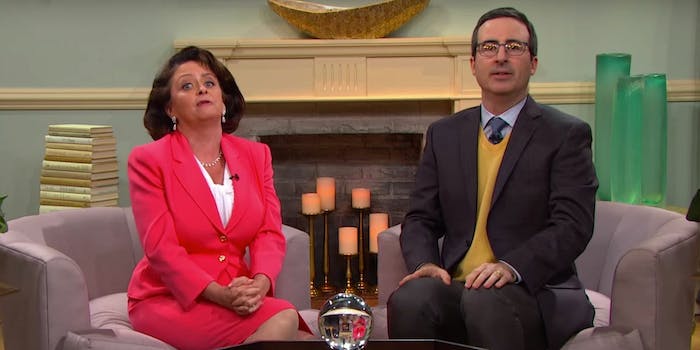 A Last Week Tonight segment that mocked televangelists for scamming sick and vulnerable people is generating pressure for the IRS to investigate.

The IRS grants tax-exempt status to churches, including televangelist ones, and rarely investigates them. During the segment, host John Oliver reported that the IRS had only investigated three churches between 2013 and 2014. Since the episode aired on Aug. 16, pressure has been growing for the IRS to investigate televangelists, CBS reports.

Televangelists preach what Oliver calls the “prosperity gospel,” an idea that Christians can become wealthy by donating money to a church.

“They preach something called the prosperity gospel, which argues that wealth is a sign of God’s favor and donations will result in wealth coming back to you,” he explained. “That idea sometimes takes the form of seed faith—the notion that donations are seeds that you will one day get to harvest.”

According to CBS, many churches have declared the “prosperity gospel” to be heretical, but that hasn’t stopped televangelists from soliciting donations during their broadcasts.

Oliver highlighted several televangelists’ lavish lifestyles, contrasting them with the story of a woman who died of cancer after spending her money on “seed faith” rather than treatment.

Oliver aired an IRS training video in which the tax laws relating to churches were called “purposely broad and a little vague.” To test his theory that the IRS is not harsh enough on televangelists, Oliver set out to create his own church, called Our Lady of Perpetual Exemption.

Our Lady of Perpetual Exemption accepts donations online and describes tapings of Last Week Tonight as its church services. “Our Lady of Perpetual Exemption may choose to wind down and dissolve in the near future,” its website states. “Upon dissolution, any assets belonging to the Church at that time will be distributed to Doctors Without Borders.”

Update 3:50pm, Aug. 24: “We have received thousands of envelopes with thousands of dollars—some featuring heartwarming notes, such as this $5 bill with the message, ‘Take my seed, you rat-faced bastard,’” Oliver noted on the latest episode of Last Week Tonight. The church of Our Lady of Perpetual Exemption has done well for itself in just over a week, earning contributions from all corners of the globe, including beef jerky, a “$100 trillion bill from Zimbabwe,” actual seeds, and, of course, thousands of dollars. “We also received multiple checks, including this one for $65 billion, which you may have sent in as a joke, but guess what? We’re fucking cashing it. So who’s laughing now?”