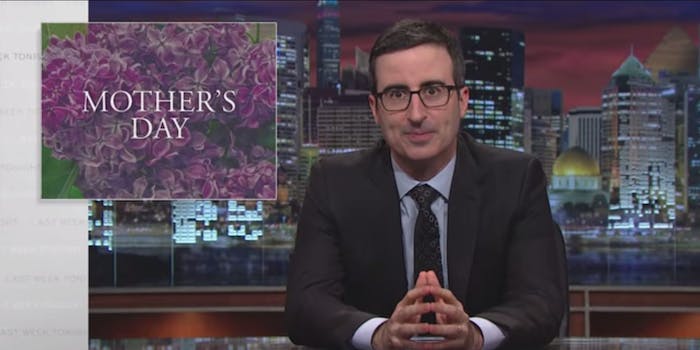 There are only two countries that don't give paid leave to new moms, and the U.S. is one of them.

John Oliver is here to make you feel bad about Mother’s Day—and no, he isn’t just reminding you about corporations cynically monetizing an innocent holiday.

The U.S. is one of the only two countries in the world (along with Papua New Guinea) that doesn’t grant paid family leave to new parents. In this Last Week Tonight segment, we see some of the horror stories of motherhood in the U.S. With no access to paid maternity leave, many women have to rely on credit cards, vacation time, or sick days to give birth and spend a few days with their new baby.

For a country that celebrates moms with such enthusiasm on Mother’s Day, it’s depressing to see how badly things go for them on the other 364 days of the year.

Can it really be this hard to make sure new parents get a few weeks to spend time with their newborn children? Apparently so.