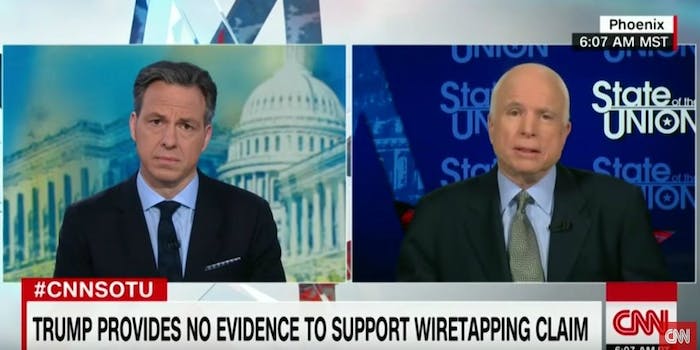 Aside from Press Secretary Sean Spicer demanding a congressional investigation into the topic that seemingly came to Trump’s attention because of a lone Breitbart article, Trump has refused to talk about it since then.

But Sen. John McCain (R-Ariz.) discussed the topic on Sunday’s edition of CNN’s State of the Union when he told Jake Tapper that Trump either needed to present evidence of Obama’s wiretapping or retract the claim entirely.

“President Trump has to provide the American people, not just the intelligence committee, but the American people with evidence that his predecessor … was guilty of breaking the law, because our [former] director of national intelligence, General [James] Clapper, testified that there was absolutely no truth to that allegation,” McCain said. “I think the president has one of two choices: either retract or provide the information that the American people deserve. Because if … President Obama violated the law, we’ve got a serious issue here, to say the least.”

Tapper followed that by asking McCain if he thought there was any evidence to back up Trump’s claim. McCain said he didn’t think the charge was true.

McCain—along with Sen. Lindsey Graham, who said he would get to the bottom of the wiretapping claim the same day Trump tweeted out his allegations—has been one of Trump’s fiercest Republican critics. Trump, meanwhile, has ripped McCain for that, saying in January that McCain and Graham are “always looking to start World War III.”