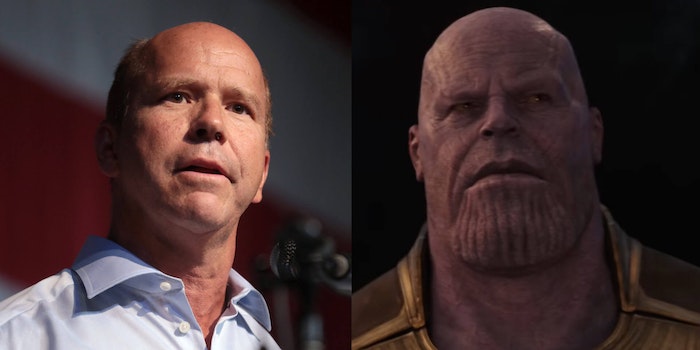 Well, the crowded Democratic 2020 field did get split in half.

John Delaney, the former congressmen hoping to become the Democratic candidate for president in 2020, will not be in the next debate in two weeks.

He won’t be alone. A number of candidates that you’ve seen in earlier debates like Rep. Tulsi Gabbard (D-Hawaii), Marianne Williamson, Mayor Bill de Blasio, and Sen. Kirsten Gillibrand (D-N.Y.) also failed to meet the necessary qualifications to make the next debate.

On Wednesday, Delaney spoke with MSNBC about not making the cut and the winnowed field of candidates, and jokingly compared the Democratic National Committee to the villain Thanos from Avengers: Infinity War and Avengers: Endgame.

“The way the DNC decided to do these debates is they effectively cut out half the field. I don’t think ultimately voters want that to happen,” Delaney said, adding: “They’re kind of like Thanos, snapping their finger and trying to get rid of half the field. That’s really kind of what they did. Some of the outcomes don’t make any sense.”

2020 Democrat @JohnDelaney compares the DNC to Thanos, saying: "They're kind of like Thanos, snapping their finger and trying to get rid of half the field."https://t.co/21n769WPC5 pic.twitter.com/MUfDTKoyXa

Delaney is polling at less than one percent, according to Real Clear Politics, which tracks a number of different polls.