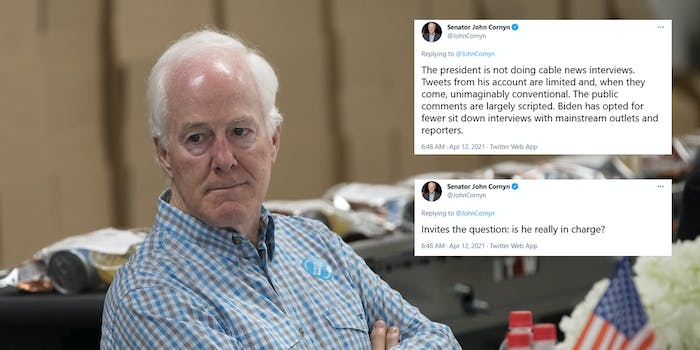 Apparently Twitter engagement is essential to being 'in charge' at the White House.

Sen. John Cornyn (R-Texas) questioned on Twitter whether President Joe Biden was actually “in charge” because his tweets are not as frantic as former President Donald Trump.

The Texas senator, who has a long history of being dunked on by Twitter users, used a Politico story published on Monday to try and make his point.

The Politico story notes that Biden’s communications team has a “do no self-harm” strategy, which is a stark contrast to the often chaotic nature of Trump’s messaging strategy while in office.

Cornyn copied several paragraphs from the report and tweeted them before questioning whether Biden was actually “in charge.”

“The president is not doing cable news interviews. Tweets from his account are limited and, when they come, unimaginably conventional. The public comments are largely scripted. Biden has opted for fewer sit down interviews with mainstream outlets and reporters,” Cornyn tweeted, quoting the Politico story.

The Texas senator continued: “Invites the question: is he really in charge?”

There’s no debate that Biden has been less public-facing than Trump, especially on Twitter. Trump’s Twitter account largely set the tone for every day of his presidency. But with Biden, there are no late-night tweets with misspelled words and announcements tend to come from the press team rather than random tweets.

But Cornyn’s apparent beef with Biden only having “conventional” tweets is somewhat ironic, because he routinely sidestepped questions about Trump’s tweets in the past.

Last June, as the Hill notes, Cornyn said he was “not familiar” with a Trump tweet where he floated a conspiracy theory about an elderly man who was shoved by a police officer in Buffalo amid protests against police brutality and racism.

NBC News reported at the time that Cornyn walked away when asked about it by reporters.

Regardless, Cornyn’s open question on Monday morning about Biden being “in charge” was met with a heavy dose of mockery.

“Making meandering calls into Fox and Friends and rage tweeting at all hours is how you demonstrate you’re truly running the country, per John Cornyn,” Twitter user @SarahLongwell25 wrote.

Many others also chimed in.

We all knew Biden was not going to use Twitter like Trump did—but apparently, for Cornyn, shitposting shows who is in charge at the White House.