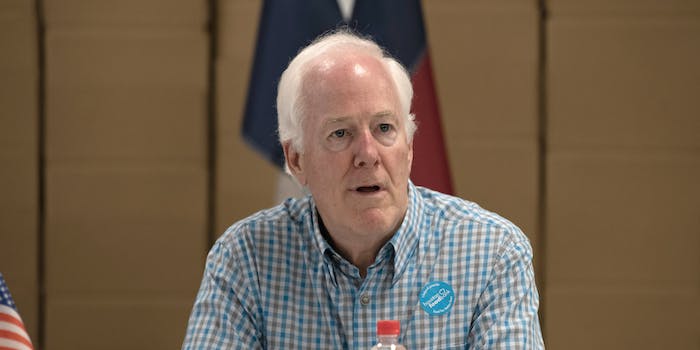 Sen. John Cornyn (R-Texas) tried to mock his Democratic colleagues in a tweet for not wearing facemasks—only to later realize the photo he was sharing was from two years before the coronavirus pandemic happened.

Cornyn retweeted a post from someone that included a picture of Sen. Sheldon Whitehouse (D-R.I.), Sen. Cory Booker (D-N.J.) and Sen. Richard Blumenthal (D-Conn.) close to one another. The original person asked “what’s missing in this photo?” to which Cornyn replied in his retweet: “Masks?”

The only problem? The photo of Whitehouse, Booker, and Blumenthal was from 2018, during the confirmation hearings for Supreme Court Justice Brett Kavanaugh, long before face masks became an important tool is slowing the spread of the coronavirus.

This is far from the first time Cornyn’s tweets have backfired, and many people online were quick to point out the fact that Cornyn’s tweet made it seem like the Democratic senators were huddled together recently.

Also among the people criticizing the now-deleted tweet was MJ Hegar, a Democrat who is challenging Cornyn in the upcoming election.

“Hi John, this picture was taken well before the pandemic. Also, I look forward to you calling out President Trump for not wearing a mask next time,” Leahy tweeted.

Other people pointed out some of Cornyn’s old coronavirus-related tweets. In mid-March Cornyn tweeted “Be smart; don’t panic. We will get us through this #coronavirus” with a picture of a Corona beer.

That tweet landed him in hot water after he blocked a Texas voter on Twitter who had replied to the tweet and criticized it. In response to that block, the Knight First Amendment Institute at Columbia University sent the senator a letter reminding him that he can’t do that.