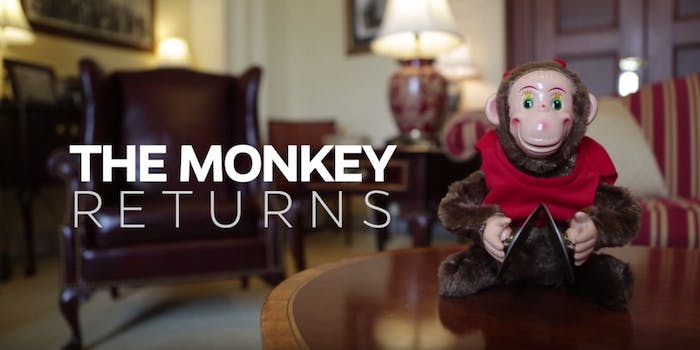 This is just what we needed on a Friday, Mr. Speaker.

House Speaker John Boehner has an important job, but his most endearing quality might be his love of the clapping monkey in his expansive Capitol office.

On Friday, as the entire city of Washington seemed to be crying out for this dreadful week to end, the Ohio Republican gave the city a dose of levity by bringing back the monkey.

“The Monkey is just one of several unique objects in [Boehner’s office suite],” the speaker’s team wrote in the YouTube video description, “but it’s the undisputed favorite of Rep. Devin Nunes’ three adorable daughters.”

When we first wrote about Boehner’s monkey, we noted its peculiar origins, based on a leaked document from the speaker’s office.

“People will often ask about the monkey sitting in the center of the room,” reads a leaked manual for Boehner interns. “Was given to the speaker as a birthday gift after the joke was made that he was often just wound up like a doll by his political advisors [sic] every night and he would proceed to clap his hands only to have his advisors wind him up again the next day.”

It’s tempting to watch this video over and over again and wonder what the monkey is thinking as it sits in Boehner’s office all day. But the YouTube video description raises another question: What other “unique objects” adorn Boehner’s walls and tables, and when might we see them?

Did Sen. Chuck Grassley (R-Iowa) give the leader of the House Republicans a mounted deer head? Did former Alaska Gov. Sarah Palin give him a pig statue wearing lipstick? Throw us a bone here, Team Boehner—or maybe, in this case, a banana.

Update 12:48pm CT, Aug. 28: Caleb Smith, Speaker Boehner’s digital communications director, followed up with some of the other interesting things in the speaker’s office—including reindeer antlers, which is close enough to a deer head from Sen. Grassley that we’ll call this a win.

The monkey is just 1 of several unique objects in @SpeakerBoehner's office. Here's a peak at others: http://t.co/s78HpUqMto @ericgeller