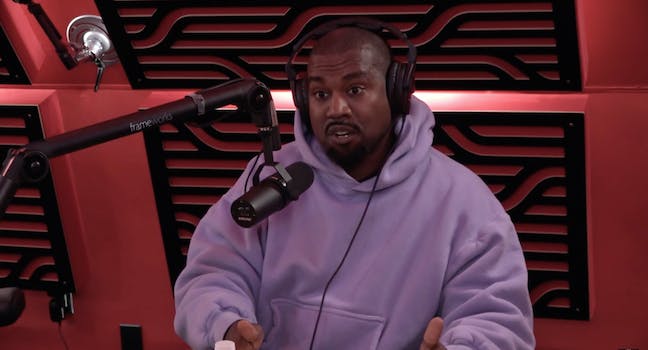 'You think it was a murder? That's a conspiracy, right?'

Joe Rogan stepped in to correct the record after Kanye West claimed that Bruce Lee was “murdered” during a recent podcast.

During the latest episode of the Joe Rogan Experience, West brought up both Lee and his son Brandon while discussing the recording industry.

“The contracts are made to rape the artists. This is a negative thought I’m putting into the universe—but I thought about Bruce and Brandon Lee,” West said. “This is Sony and Universal, and I’m willing to put the blue paint on my face and go out and do this because it’s the right thing to do.”

Confused by the reference, Rogan asked West to clarify why he brought up the two deceased film stars.

Kanye responded by asserting that the iconic father and son had both been “murdered.”

Rogan, a martial artist and fighting commentator for the UFC, quickly pushed back on what he described as a conspiracy.

The podcast host went on to explain that Brandon died on a movie set in 1993 after a dummy round from a firearm unexpectedly struck the actor in the abdomen.

“Well, Brandon Lee died in an accident on a movie set. But you think it was a murder? That’s a conspiracy, right?” Rogan said.

Rogan also wen’t on to explain that contrary to popular theories surrounding Bruce’s death, all evidence pointed to an allergic reaction that occurred after the actor took a powerful painkiller.

“The conspiracy was that the Chinese triad killed him the same way they killed Bruce, but the coroner’s report was that Bruce died from a reaction to a medication, right?” Rogan said.

West went on to state that such thoughts often enter his head while visiting the hospital.

“Yeah, I mean, but I think about that any time I go to the hospital,” West stated. “I’m very—you know, I’m mindful of that stuff.”

Rogan and West, neither of whom are strangers to controversy, spoke for nearly three hours and discussed everything from West’s presidential run to his business ventures.