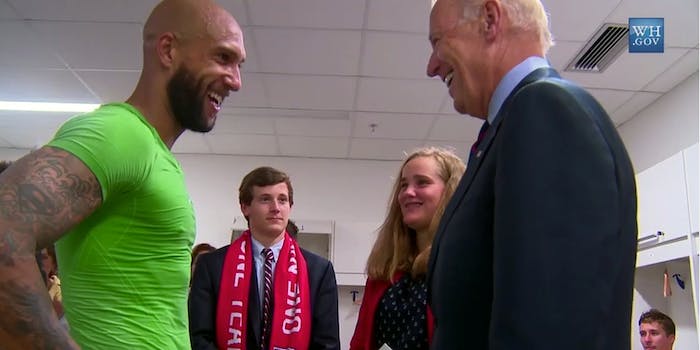 He's like a proud papa with the U.S. men's soccer team.

It’s safe to say that the Americans were ecstatic when the U.S. Men’s Soccer team’s victory over Ghana, but nobody may have been more excited about it then Vice President Joe Biden.

The vice president watched the game in the stands with the rest of the crowd and was there to congratulate the team afterwards in the locker room with his nephew and granddaughter. It was all smiles and laughs as he shook everyone’s hands—he had previously met some of the players four years ago.

“He looked happier in that first goal, you can see it on the monitor, than the night I won the elections,” Biden said about U.S. coach Jurgen Klinsmann on John Brooks’s game-winning goal.

The U.S. are only one game into the World Cup so far, but he’s probably right.