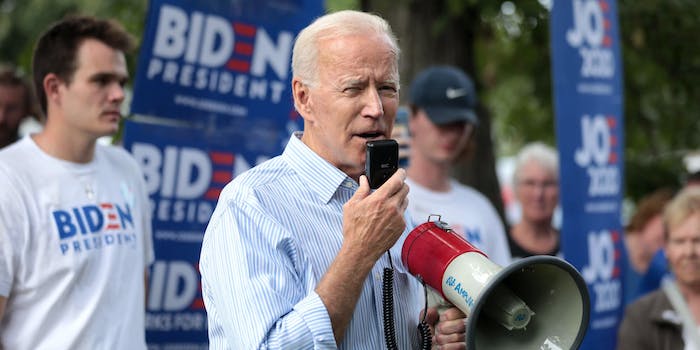 It doesn't matter if it's true.

Now that Sen. Bernie Sanders (I-Vt.) has dropped out of the presidential race, conservatives are rushing to cast the last man standing, former Vice President Joe Biden, as a socialist.

Over four decades in public life, Biden has cultivated a reputation as a moderate. And in the Democratic primary, he stepped in the way of—and stopped—a progressive movement.

Republicans think they need a socialist scapegoat to whip their base into a frenzy. With Sanders gone, that leaves Biden.

After Sanders’ announcement, they wasted no time trying to rebrand Biden as a radical.

They even said there is “no daylight” between Biden and Sanders.

Similarly, the Trump campaign immediately began working to recast Biden as indistinguishable from the famously socialist senator from Vermont.

In support of this theory, Trump campaign manager Brad Parscale tweeted a campaign ad and accused Biden and Sanders of being “both the same.”

In Parscale’s defense, it’s probably preferable to make stuff up about Biden being a socialist than to mention the federal government’s bungled coronavirus response.

Sen. Lindsey Graham (R-S.C.) got in on the fun by delivering the very definition of a back-handed compliment in a pair of tweets congratulating Sanders for a loss well done.

As a parting shot, Graham confoundingly added, “However, while I firmly believe the socialist agenda pushed by Senator Sanders is out of the mainstream of America, in many ways his agenda will be the on [sic] ballot in 2020.”

Sanders’ supporters were understandably disappointed, angry even, that he withdrew from the race.

But they could take comfort in knowing that the most dangerous man on the left is now leading the party.