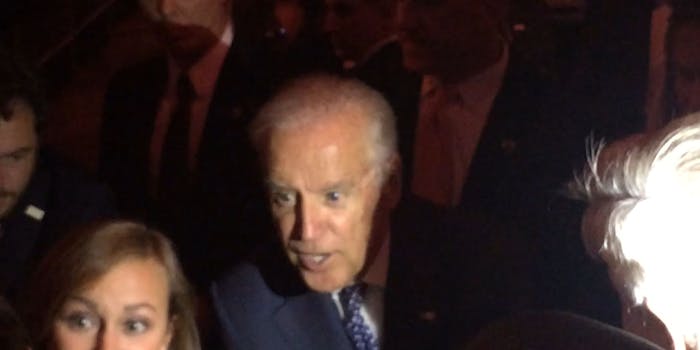 Vice President Joe Biden on Thursday spoke to a sold-out crowd at the Freedom to Marry “going out of business” event in New York City. Biden jubilantly celebrated and commended the recent U.S. Supreme Court decision allowing same-sex marriage in all 50 states.

Biden began his speech on Thursday with a story from when he was 17. When he saw two men kiss on a street corner, he looked at his father. His father responded, “Joey, they love each other, it’s simple.” Biden credited his family for why the issue of same-sex marriage “has never been that complicated,” for him.

“Although this is a gigantic step towards equality, there are still many more steps we have to take,” Biden said. He later referenced the next steps in the fight for equality for gay and lesbian people. “Although the freedom to marry, and for that marriage to be recognized in all 50 states [is] the law of the land, there are still 32 states where marriage can be recognized in the morning and you can be fired in the afternoon. This next door is going to be a hell of a lot easier to push open as long as we expose to average Americans [to] the injustice that continues to exist.”

Biden finished his speech by mentioning the recent Women’s World Cup winner, American Abby Wambach “with a flag in hand and her arm around her wife, giving her a kiss. That is really something,” Biden said. “It was just as normal as countless other times you’ve seen that happen.”

Biden famously supported same-sex marriage in an appearance on Meet The Press in 2012. Biden jumped ahead of the official White House stance on same-sex marriage, saying “I am absolutely comfortable with the fact that men marrying men and women marrying women and heterosexual men and women are entitled to all the same exact right. All the civil rights and all the civil liberties. I don’t see much of a distinction beyond that.”

Biden’s statement on Meet The Press forced President Obama to announce his support for same-sex marriage earlier than planned. Biden called the same-sex marriage movement the “civil rights movement of our generation.” He went on to say that “this decision is as consequential as Brown vs. Board,” a historic civil rights decision that declared separate schools for black and white children unconstitutional.