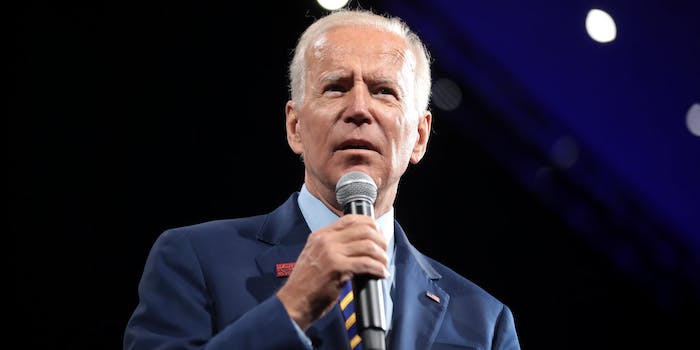 Biden has called for legalizing medical marijuana, but hasn't gone as far as other 2020 rivals.

2020 Democratic presidential hopeful Joe Biden said recently that his concern about marijuana being a “gateway drug” is one reason that he has not called for legalizing the drug.

Specifically, Biden said “there’s not nearly been enough evidence” to show that marijuana is not a “gateway drug” when asked about it at a town hall event in Las Vegas, Nevada, over the weekend, according to Business Insider.

The former vice president continued, saying that he would “want a lot more” evidence before legalizing it on a federal level, but he also thought possession of marijuana “should not be a crime.”

“The truth of the matter is, there’s not nearly been enough evidence that has been acquired as to whether or not it is a gateway drug,” Biden said, according to the news outlet. “It’s a debate, and I want a lot more before I legalize it nationally. I want to make sure we know a lot more about the science behind it.”

In Biden’s criminal justice reform plan on his campaign website, the former vice president calls for decriminalizing marijuana and expunging marijuana use convictions.

The plan also calls for legalizing medical marijuana and letting states decide whether they want to legalize it fully.

Biden’s stance on marijuana legalization stands in contrast to many other 2020 rivals.

Sen. Bernie Sanders (I-Vt.) has said, if elected president, he would legalize marijuana within the first 100 days of his presidency. (He also dropped his plan for legalization at 4:20 p.m.).