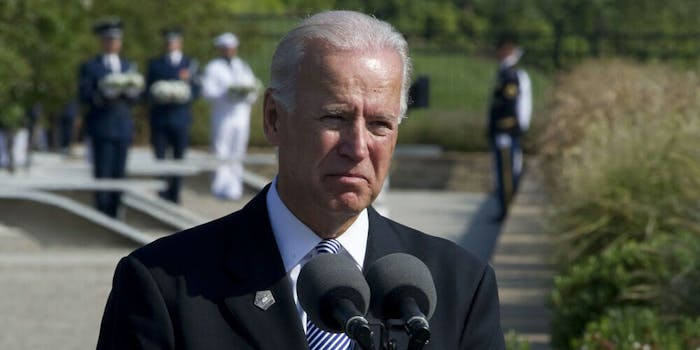 Joe Biden just got exposed as a rave hater.

On Wednesday, a Twitter user by the name of Nando showcased the clip, which shows the 2020 presidential hopeful railing against electronic dance music (EDM) nearly two decades ago.

Biden was speaking in support of bipartisan legislation he introduced known as RAVE or the  “Reducing Americans’ Vulnerability to Ecstasy Act.” The bill called for cracking down on the recreational drug ecstasy, often associated with the rave scene.

Amid his testimony, Biden suggested that towns should pass new ordinances that would criminally penalize rave organizers.

“The promoter, the guy who owns the building, I would put the son of a gun in jail. I would change the law,” Biden said at the time.

The politician also bragged about his involvement in authoring the “crackhouse legislation” in 1986, a reference to the Emergency Crack Control Act, which Biden argued could be used to shut down any location known to contain drugs.

In an effort to further emphasize his hatred towards raves, Biden suggested that his crackhouse bill could even be used to bulldoze down rave sites.

“In rare cases under the law that exists federally you can literally bulldoze down their business,” Biden said. “I’m looking forward to the first time I see it happen. Great big bulldozer. Just bulldoze it down.”

One Twitter user reacted to the footage by converting Biden’s testimony into a techno song, which we can only hope will be played at raves.

Others simply trolled the former senator for his over-the-top view towards combatting illegal drug use.

Mr Senator TEAR DOWN THIS RAVE

Questions were also raised as to why Biden thinks there are buildings in the desert housing raves.

He thinks Burning Man has a building, also, apparently.

It currently remains unclear how powerful the rave voting block is and whether Biden’s comments will affect his presidential run.