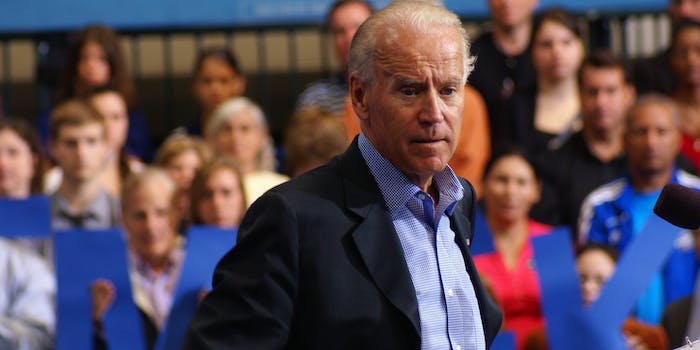 Biden talked about some of the struggles in his own life—particularly the death of his son Beau, who passed away last year from brain cancer. He talked about the self-sacrifice of soldiers and teachers. And he talked about his close, personal, three-decade relationship with Democratic presidential nominee and former Secretary of State Hillary Clinton.

Biden recounted his hardscrabble story of growing up in middle-class neighborhood of Scranton, Pennsylvania, which he used as an opening to attack Trump. “To state the obvious, and I’m not trying to be a wiseguy, that’s not Donald Trump’s story,” he charged. “His cynicism is unbounded. His lack of empathy and compassion can be summed up in a phrase that he’s proud of and that he made famous: ‘You’re fired.’ Think about that. Think about everything you learned about as a child. Think about the way you were raised. How can there be pleasure in saying ‘you’re fired?’”

“He’s trying to tell us he cares about the middle class—give me a break. That’s a bunch of marakley.”

“He’s trying to tell us he cares about the middle class—give me a break,” Biden thundered. “That’s a bunch of marakley.”

“Let me say something that has nothing to do with politics,” Biden continued, before launching into an attack on Trump that seemed to have at least a little to do with politics. “In this complicated and uncertain world we live in, the threats are too great, the times are too uncertain, to elect Donald Trump as the president of the United States. … No major party nominee of the history of this nathion has every known less or been less prepared to deal with our national security.”

Biden went on to slam Trump for exploring American’s fears about terrorist attacks from ISIS, for wanting to back away from long-standing international partnerships like NATO, and for embracing Russian President Vladimir Putin, who, U.S. intelligence officials and cybersecurity experts believe, was involved in a cyberattack against the Democratic National Committee’s email servers specifically designed to influence the outcome of the election.

At that moment, Joe Biden became one with the @TheOnion's Joe Biden.

However, not everyone appreciated all of Biden’s rhetoric.

In an interview immediately after the speech, Biden addressed concerns that, with the end of his term in office, he would step away from the limelight.

"I ain't going away guys," says Joe Biden after his speech pic.twitter.com/bhv7JWAPiQ