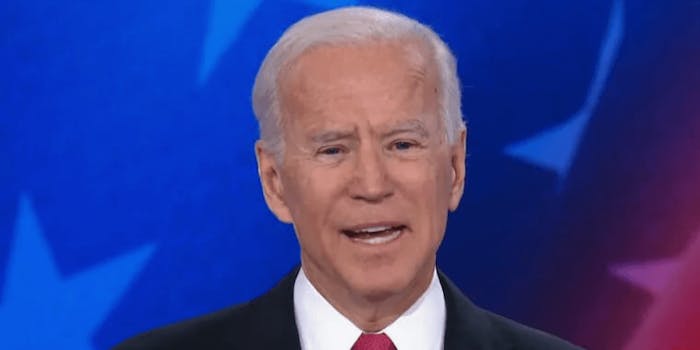 He didn't complete a lot of thoughts.

One of the worst jobs in politics right now has to be “Joe Biden staffer on debate night.”

The reason behind this is something we can all see: Joe Biden cannot put forth a full thought on stage. Last night’s Democratic debate was no different and it gave us a few truly surreal Biden moments.

Biden has a stutter, which is in no way his fault. It’s one he’s long fought to overcome. But it also doesn’t mitigate or begin to explain the disjointed way he articulates points onstage—jumping rapidly from one thought to the next, peppering clauses with anecdotes, and never coming to a convincing conclusion.

On paper, you can usually see where he is trying to go. The transcript of last night’s Democratic debate is much kinder to Biden than the experience of actually watching him live.

But for the candidate whose claim is he’s the most electable, he has a hard time proving in person why that’s the case.

Take Biden’s very first answer from tonight’s debate, at around 8:55 in the video below:

I know what Biden is saying, that he is the only one who’s going to beat President Donald Trump and make Republicans act like honorable West Wing characters again, but only because I’ve listened to this clip several times and read the transcript.

Hearing it live was disorienting.

Asked how he was going to work with Republicans in Congress who want his son jailed, he launched into an explanation of how he was going to get Democrats elected to Congress, punctuating it with an anecdote about innocent people getting killed by Russian soldiers, before somehow concluding that Putin doesn’t want him to be president and that voters need to find out “who is most likely to do what needs to be done.”

He didn’t conclude by saying that was him.

But let’s try Biden’s next answer, at 22:40 into the debate. We’re doing the healthcare thing, so buckle up. Responding to a Bernie Sanders call for Medicare for All, Biden said:

“You know, we can do this [healthcare?] without charging people—raising $30, $40 trillion dollars.”

Not a complete thought. It’s almost like Biden’s just saying words to stay somewhere within the basepath of a talking point and not really caring how they come out (also, estimates for the cost of Medicare for All vary widely, but Sen. Warren currently estimates $20.5 trillion over a decade).

Anyway, he continues: “The fact is that right now the vast majority of Democrats do not support Medicare for all.”

“I trust the American people to make a judgment what they believe is in their interest and not demand of them what the insurance companies— they want no—no competition. And my friends say you have to only go Medicare for All.”

Biden’s third answer at 36:35, on whether a woman is qualified to be president, starts out strong, until he tries to list a few of his accomplishments and pivots to something else.

Unfortunately, the question asked of the senator, Amy Klobuchar, was about Pete Buttigieg’s experience.

Biden’s answer at 42:00 on whether he’d direct the Justice Department to prosecute Donald Trump after he leaves office starts out well. Biden will let his DoJ be independent. Nice. Then there’s this: “Let’s start talking civilly to people and treating—you know, the next president starts tweeting should—anyway.”

That line got a laugh, which was extremely generous considering how often Biden just whole cloth gives up on thoughts in the middle of debates.

The rest of the debate continued in the same vein. Looking at the transcript, you can clearly make out the points that Biden is trying to make. But they often come out in jarring, inexplicable ways, like when he briefly spoke about violence against women:

Keep… punching and punching at… domestic violence. Whew. To sum this all up: here’s a great quote from Biden’s answer on foreign policy around 1:12:00 in, presented without context:

“Look what he’s done to—and so this guy has no idea what he’s doing. He has no notion how to go about it. And we need a commander-in-chief who when he stands everybody knows what he or she is talking about.”

A great point. We do need a commander-in-chief who when he stands everybody knows what he or she is talking about.

For the past three years, we’ve had one who rambles semi-coherently for hours on end. In that respect, Biden certainly is the status quo candidate.