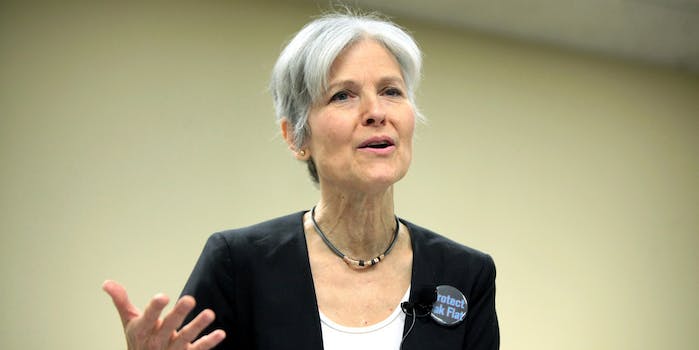 Some say she 'gentrified' a day meant to celebrate black liberation.

Many of the 2016 presidential candidates have received backlash on social media for posting controversial statements. The latest to receive criticism, however, was not either of the presumptive Democratic or Republican candidates.

Green party candidate Jill Stein recently posted a status to both Twitter and Facebook regarding a Juneteenth festival taking place in Philadelphia. But her photo–which features mainly white people–has received flack on Twitter for holding a rally full of white people to honor a day meant for African-Americans.

Awesome turn out to gather signatures to #GetJillOnTheBallot 🗳 in Pennsylvania at Philly's #Juneteenth festival! pic.twitter.com/Y1uu1WIlM7

Juneteenth–a contraction of the date “June Nineteenth”–is a celebration which commemorates the ending of slavery in the United States. On June 19, 1865, in Galveston, Texas, Union General Gordon Granger issued General Order Number 3, which stated: “The people of Texas are informed that, in accordance with a proclamation from the Executive of the United States, all slaves are free.”

The announcement came two and a half years after President Abraham Lincoln’s Emancipation Proclamation, which had little influence on Texas and other southern states since there were no Union troops around to enforce Lincoln’s orders. Therefore, around 250,000 people remained enslaved in Texas until Union soldiers arrived in Galveston and ordered their freedom. Juneteenth became a Texas state holiday in 1979.

Since the day is usually celebrated by the minority population, Stein’s tweet quickly went viral after many voiced their opinions regarding the ‘white-washing’ of the black holiday.

Everything that is wrong with Jill Stein & her supporters in one picture. An all-white privileged Juneteenth. Ugh. https://t.co/1EEFItmQGi

I still can't get over that Jill Stein pic at a Juneteenth meeting in Philly. Hardly any Black ppl, yet ppl surprised she's not on a ballot

Dr. Jill Stein holding a rally full of white people "in honor of" Juneteenth makes my skin crawl in a very special way.

Jill Stein's JUNETEENTH gatherings. In Philly. A majority black city. THIS who y'all willing to risk it all for? 😂 pic.twitter.com/OTkNgaNLIQ

The Stein campaign did not respond to our request for comment