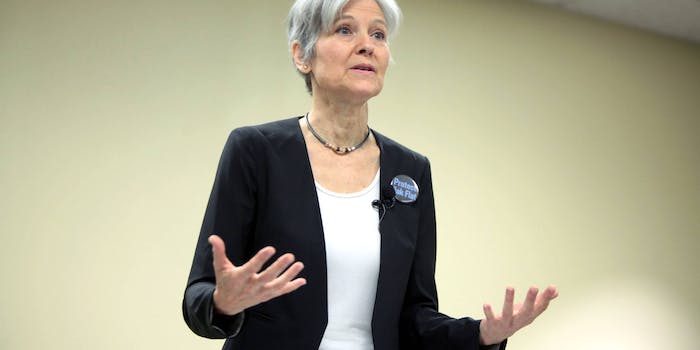 'We are here at the barred gates of American debates'

On Monday evening, former Secretary of State Hillary Clinton and real estate mogul Donald Trump will gather onstage at Hofstra University in Hempstead, New York, for the first presidential debate of the 2016 election.

Notably absent from the debate stage will be Green Party candidate Dr. Jill Stein and Libertarian candidate former Gov. Gary Johnson—neither of whom were able to meet the 15 percent polling threshold set by Commission on Presidential Debates (CPD). Johnson will be spending the debate tweeting from Twitter’s corporate office in Manhattan. Stein will be livestreaming from a protest outside the debate venue.

Both Stein and Johnson have lobbied hard to be included in the debates. However, the commission, which is a nonprofit organization created and controlled by the Democratic and Republican parties, have consistently rebuffed their efforts.

For Stein, at least, this lobbying is nothing new. When she ran as the Green Party nominee four years ago, Stein staged a similar protest when President Barack Obama squared off against former Massachusetts Gov. Mitt Romney on the very same stage at Hofstra University. Stein’s goal was to make a point about how the two major parties use their institutional advantages to shut out other voices.

She ended up spending eight hours handcuffed to a chair.

Stein was arrested at the second Obama-Romney presidential debate of the 2012 cycle. Moderated by CNN correspondent Candy Crowley, the debate was styled as a town hall where undecided voters had the opportunity to directly ask questions of the candidates.

Standing outside the venue, about six hours before the proceedings were set to kick off, Stein and her running mate Cheri Honkala, held up an American flag and made their case to the assembled media.

“We are here at the barred gates of American debates to say that we need to open up this debate and make it a full, fair, and inclusive debate,” said Stein, video of which was captured by the left-wing media outlet Democracy Now. “Our Green campaign is on the ballot for 85 percent of voters. Eighty-five percent of voters deserve to know who their choices are in this election and what the real solutions are that can solve the desperate problems that we’re facing. The Commission on Presidential Debates makes a mockery of democracy by conducting this fake and contrived debate.”

Flag in hand, Stein and Honkala started walking down the middle of the road toward the debate venue, but law enforcement officials soon stopped them. They attempted to plead their case to be let in and allowed onstage but were rebuffed.

“Well, we’re here to stand our ground,” Stein said, a security official clutching her arm. “We’re here to stand ground for the American people, who have been systematically locked out of these debates for decades by the Commission on Presidential Debates.”

“We think that this commission is entirely illegitimate; that if—if democracy truly prevailed, there would be no such commission, that the debates would still be run by the League of Women Voters, that the debates would be open with the criteria that the League of Women Voters had always used, which was that if you have done the work to get on the ballot, if you are on the ballot and could actually win the Electoral College by being on the ballot in enough states, that you deserve to be in the election and you deserve to be heard; and that the American people actually deserve to hear choices which are not bought and paid for by multinational corporations and Wall Street.”

With that, the 2012 Green party presidential ticket moved back into the road and sat down, refusing to move. After ignoring calls to get out of the way of the flow of traffic, they were arrested. Here’s video of the incident, recorded by Daily Dot contributor Fran Berkman:

“The arrest was outrageous and shouldn’t be tolerated in a country that is a leading proponent of democracy,” Stein’s 2012 campaign manager Ben Manski told ABC News. “They knew that there was the possibility that they would be arrested. Their intention was to enter the premises and bear witness to the mockery of democracy that is tonight’s debate.”

We were held at a facility especially created for detaining protesters at the debates. It appeared to be a warehouse which had been specially equipped. It was obviously—you know, they were prepared to handle a lot of people. They had 13 officers there and three plainclothesmen. For most of the time, it was just Cheri Honkala and myself, yet they felt the need to keep us in tight plastic restraints, tightly secured to metal chairs.
…
It was about eight hours. And we were charged only with violations, not even with misdemeanors, and yet they felt compelled, despite having 13 officers there to keep these two women, mothers, handcuffed to chairs for the entire time.
…
They said, no, we couldn’t be released because then we might go wandering around. And we said, “Well, how about if we tell you that we will stay in our chairs?” And they said, “No, that’s not OK.”
…
They held us for about another half-hour, hour [after the debate was over], and then they released us, telling us that our car was waiting in the parking lot. It was actually a Secret Service car, apparently, that was waiting in the parking lot. We didn’t—we weren’t allowed to make a phone call. There was no phone that was working. They wouldn’t—we didn’t have ours. We had given our phones to our assistant, so it was—you know, it took quite a bit of work to be able to borrow a cellphone from someone in a gas station—you know, there we are in the freezing cold—to even be able to find our staff.
…
They allowed me to return a call to our lawyer. But at the time, we didn’t know when we would be released, so there were no arrangements made for a pickup. And they actually told our staff that they would be arrested if they continued to wait on site, so they had to leave.

After her arrest, Stein filed a lawsuit against the CPD charging that it had “deprived her of her constitutional rights to due process, equal protection, and free speech, as well as her statutorily protected civil rights.”

The suit asked for the issuance of an emergency court order halting the next presidential debate, along with monetary damages. The court didn’t buy her argument and the subsequent debates went on as planed.

The first nationally televised presidential debate occurred between Richard Nixon and John F. Kennedy on Sept. 26, 1960. Kennedy famously clobbered Nixon in that debate, at least among viewers who watched on TV rather than listening on the radio, and there wasn’t another for the next 16 years—until the League Of Women Voters organized a match-up between Gerald Ford and Jimmy Carter. The independent, nonpartisan group sponsored presidential and vice-presidential debates for over a decade.

In 1988, the organization withdrew its sponsorship of the debates because, as then-League of Women Voters President Nancy Neuman said in a statement, “the demands of the two campaign organizations would perpetrate a fraud on the American voter. It is has become clear to us that the candidates’ organization aim to add debates to their list of campaign-trail charades devoid of substance, spontaneity, and honest answers to tough questions.”

The campaigns for Vice President George H.W. Bush and Gov. Michael Dukakis, which coordinated with each other and presented a non-negotiable set of demands to the League, wanted unprecedented control over the proceedings—from the selection of the moderators to who would be in the audience to which media outlets would be given access.

“The League has no intention of becoming an accessory to the hoodwinking of the American public,” Newman added.

The CPD, a group set up by the Democratic and Republican parties, has run the debates ever since. With the exception of independent candidate Ross Perot’s appearance in the debates, CPD has shut out all third-party candidates.

Stein and Johnson filed an antitrust suit last year to get into the 2016 debates, but it was dismisses in August. “Plaintiffs have no standing and because antitrust laws govern commercial markets and not political activity, those claims fail as a matter of established law,” the court wrote in its opinion. “Plaintiffs also allege violations of the First Amendment, but those claims must be dismissed because the First Amendment guarantees freedom from government infringement and defendants here are private parties.”