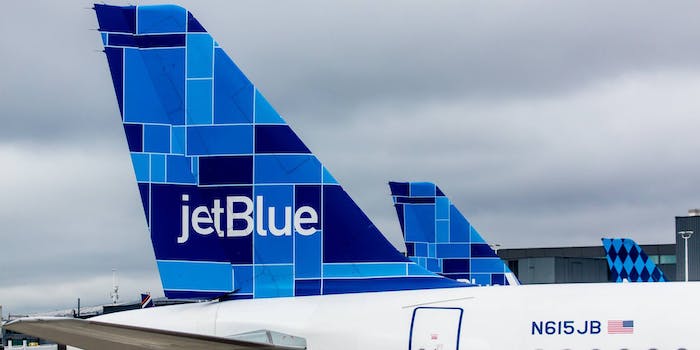 At least someone gets it.

JetBlue announced today that it now has free, high-speed Wi-Fi on all of its aircraft.

First introduced in 2013, Fly-Fi offers speeds of around 15 megabits per second (Mbps). That is right around the average internet speed in homes throughout the United States at the start of last year, according to Akamai’s State of the Internet report.

It’s fast enough to surf the web, chat on messenger apps, and even stream HD content from Netflix or Amazon. It does fall short of Netflix’s 25 Mbps recommendation for Ultra HD (4K) quality content, but is well above the five megabits needed for HD streaming.

The company is also adding content from the Verge, an online tech publication, to its entertainment portal, and furthering its partnership with Amazon by allowing customers to gain three TrueBlue points for every dollar spent through the online retailer.

Fly-Fi uses Ka-band technology from ViaSat, a gate-to-gate service, so passengers do not need to wait until cruising altitude to connect to the internet. Most rival airlines haven’t done much to bring their Wi-Fi offerings up to standard, charging egregious amounts to connect to slow wireless internet.

Delta and American Airlines, for example, charge $16 a day for U.S. domestic flights with their Gogo service. Be ready to put a hole in your wallet if you need connectivity on an international flight.

With today’s announcement, JetBlue proves that solid internet speeds are possible while travelling, and does the unthinkable by offering them at no extra cost.