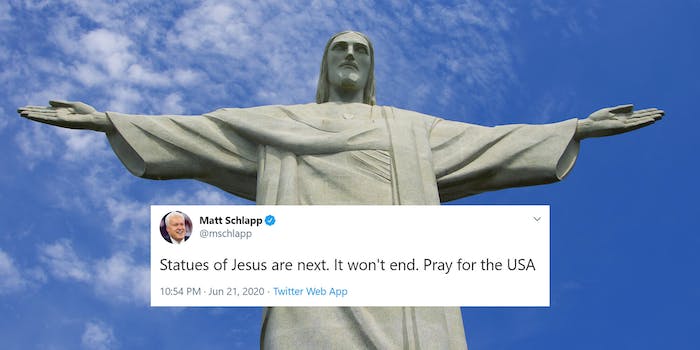 Conservatives fret that ‘statues of Jesus’ will be torn down next

There aren't any Jesus statues the government could take down.

Whenever the matter of taking Confederate statues down in America crops up (it seems to happen every few years), conservatives respond with the lament of “where will it stop?”

What’s next, they wonder? Thomas Jefferson owned slaves, as did George Washington. If we take down Confederate monuments, what will stop people from demanding tributes to American icons be torn down?

Over the weekend, right-wingers felt they’d received confirmation the mob was going too far when New York City announced it would remove a statue of Teddy Roosevelt.

Never mind that the decision to remove it had nothing to do with Roosevelt and more with racist tropes it depicted, now that America’s foundational figures aren’t safe, would leftists go even further?

What’s to stop them, wrote prominent President Donald Trump supporter Matt Schlapp, whose wife Mercedes works on the president’s campaign, to tear down a statue of Jesus?

“Statues of Jesus are next. It won’t end. Pray for the USA,” he tweeted.

The thing is, though, all these statues taken down are on public space, having been commissioned by the government. And as the American government keeps a strict separation of church and state… there are no federal statutes and monuments to Jesus.

Because the toppling of statutes has nothing to do with what private citizens do and worship on their own land, but what messages the state chooses to send with the iconography it erects.

That aside, many also noted that Jesus, famously a brown man killed by the state, wouldn’t be the target of protesters’ ire, given that he never held slaves or endorsed racism in his teaching.

The dunking on Schlapp was so severe that “Statues of Jesus” trended on Twitter recently.

But as of now, no leftist mob has called for removing Jesus statues.