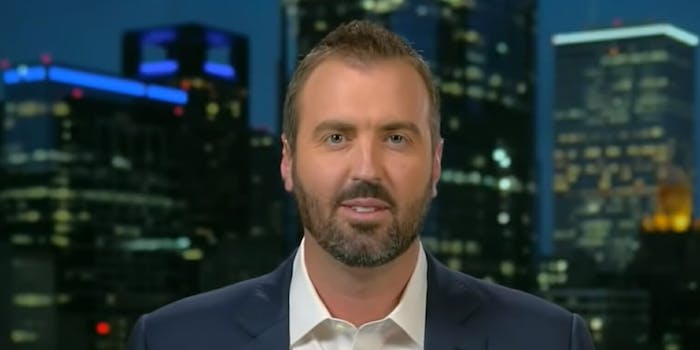 He's the latest in a number of right-wing personalities to be banned recently.

Twitter reportedly banned conservative pundit Jesse Kelly on Sunday just days after it did the same to another high-profile right-wing activist.

“I had almost 80,000 followers and those poor people are now left aimlessly wandering the social media landscape in search of a greatness they’ll never find again,” he wrote in an op-ed for the Federalist. “Now, I don’t really care because I’m just going to start a new account and it will be even better than my last one (if that’s possible). This isn’t about me. This is about what kind of country we have become and what kind of country we want to be.”

Twitter declined to discuss the ban with the Daily Dot, citing its policy on not commenting on individual accounts.

.@JesseKellyDC just shared this with me.

He’s permanently banned with no explanation. He broke no rules.

This madness has to stop. pic.twitter.com/zvwgSLg1Ri

As the Hill points out, it appears that Kelly should have been notified about what rules and policies he violated to provoke a ban.

The banning of Kelly comes just days after right-wing activist Laura Loomer was kicked off the social media platform. Her ban appeared to be a result of a tweet about Minnesota’s Democratic Representative-elect Ilhan Omar.

Loomer threatened to file a lawsuit as a result of the ban in a statement on YouTube.

Kelly wrote another op-ed for the Federalist in late-August amid the banning of InfoWars host Alex Jones on several social media sites, calling his banning a “slippery slope.”

“While it is not surprising to see the jackals on the left cheer at the burning of books, one would hope folks on the right would look in the mirror and realize their time is coming soon,” he wrote. “The leftists will not stop (and did not stop) at nutty Alex Jones, because they do not think you are much different from him.”

Conspiracy theorist Liz Crokin was also removed from the site over the weekend.