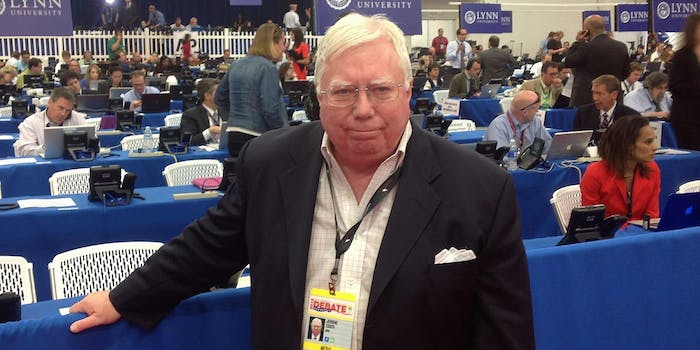 Who is Jerome Corsi, Roger Stone’s possible link to WikiLeaks?

He could be a link, and it could be nothing.

On Monday, conspiracy theorist, Roger Stone associate, and frequent InfoWars contributor Jerome Corsi announced that he would reject any offer of a plea deal with Special Counsel Robert Mueller.

That caps off an interesting two weeks for Corsi. In early November 2018, Corsi said he expected to be indicted by a grand jury in the investigation of Special Counsel Robert Mueller.

Taking to his daily livestream, Corsi went through the details. He claimed that he’d painstakingly cooperated with Mueller’s prosecutors over the course of 40 hours of interviews.

Notably, Corsi did not admit to having perjured himself, only to falling into a “perjury trap” set for him by Mueller’s team, who he wrote off as part of the “deep state.”

Jerome Corsi, a friend of the Trump adviser Roger Stone, said he expects to be charged with lying in a YouTube live stream that included a plea to listeners for money to cover his legal fees https://t.co/OsRPQAcJCE

“I anticipate being indicted on a charge of some form of lying,” Corsi told his viewers, describing how federal prosecutors hounded him to the point where his mind was “mush.”

“I guess I couldn’t tell the special prosecutor what he wanted to hear,” he continued.

But why would Mueller’s staff be interested in Corsi in the first place? What link does he have to possible Russian interference in the 2016 election? And can the deep state just set perjury traps for unwitting Trump supporters?

Jerome Corsi’s lawyer just told me he’s expecting a call from Special Counsel’s office today. He says it could be an indictment. @NBCInvestigates

Who is Jerome Corsi?

Born in 1946, Corsi had a thriving career in financial services marketing until he switched gears to become one of the most prominent publishers in the burgeoning right-wing conspiracy movement.

In 2004, he shot to national prominence with his book “Unfit for Command.” The book attacked then-presidential candidate John Kerry’s Vietnam War service, painting him as a coward and traitor.

After that, Corsi published a steady stream of inflammatory claims. He accused U.S. politicians of funding Iran’s nuclear program, pushed the false claim that the U.S. was going to unite with Canada and Mexico, claimed Adolf Hitler fled to South America after World War II and shilled for the pseudoscientific concept of oil made from plants rather than fossils.

Corsi’s real claim to fame was being one of the first right-wing writers to zero in on Barack Obama as an object of conspiracies. Corsi relentlessly pushed the idea that Obama’s birth certificate was fake, that he wasn’t born in the United States, and that Obama is secretly gay and secretly Muslim.

More recently, Corsi has pushed the QAnon conspiracy theory, becoming one of its most prolific advocates before turning his back on it.

His Obama conspiracy theories placed him in the orbit of longtime Republican operative Roger Stone. Corsi was one of numerous Stone associates subpoenaed by Mueller. It also put him on Donald Trump’s radar.

Conspiracy theorist and Roger Stone ally Jerome Corsi, who just told NBC he expects to be charged in the Mueller probe, is currently livestreaming about how he expects to be indicted. https://t.co/lVUPx5oDZ2

Like everything related to the Mueller investigation, details are scarce. But Mueller’s team is apparently zeroing in on how Corsi fits in with Roger Stone’s connection to WikiLeaks.

In October, NBC News broke a story that Mueller’s team seemed to have been running down for months: that Corsi knew not only that WikiLeaks had obtained the emails hacked and stolen from Clinton campaign chair John Podesta in summer 2016, but knew when they were going to be released.

Mueller has obtained over a dozen indictments for the DNC hacking. Its link to the Trump campaign is one of the key outstanding questions Mueller and his staff are trying to solve.

Stone, for his part, has claimed that he and Corsi were communicating about opposition research related to Podesta and that the timing of the Podesta emails being dumped by WikiLeaks was merely a coincidence.

Is Corsi telling the truth?

In the right-wing conspiracy world that Corsi lives in, truth can be subjective. And it’s entirely possible that Corsi is pumping up his own importance in the Mueller investigation for financial purposes.

Jerome Corsi is asking his fans to give him money because he anticipates he'll be indicted by Robert Mueller.https://t.co/xqaJEOv0mr

Indeed, the primary purpose of his original livestream, other than announcing his woes, was to ask for money for his legal defense fund. Plus, the way he’s stayed in the news for 14 straight days is surely a boon.

But with Roger Stone firmly in Mueller’s sights, and Corsi linked to Stone, it’s not far-fetched to think that Corsi could have perjured himself to protect himself, Stone, or Trump himself.

Corsi claims he didn’t lie and was merely tricked into giving Mueller’s team information that  didn’t match what they already had.

“My only crime,” Corsi told his viewers, “is that I support Trump.”