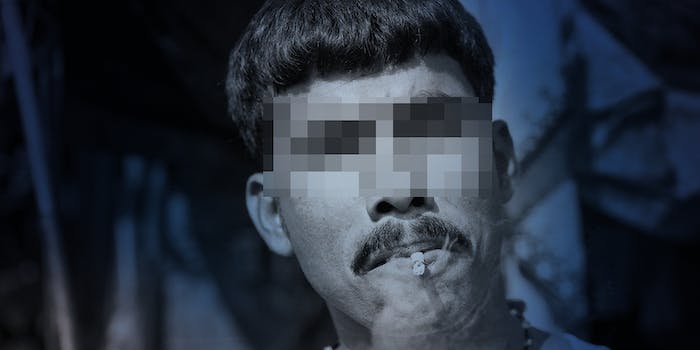 Napster co-founder Sean Parker helped Mark Zuckerberg expand Facebook, but it doesn’t look like Parker’s co-founder, John Fanning, holds Facebook users in very high regard: Fanning created a (now defunct) website called Jerk.com that siphoned information from Facebook to create profiles for people and label them either “Jerk” or “Not a Jerk.” Other people could add mean comments onto the “Jerk” profiles. It was, more or less, a rudimentary slambook based on Facebook information.

According to the Federal Trade Commision, over 73 million accounts were created between 2009 and 2013, including accounts for children. Jerk made money through ads, and users had to pay a $25 customer service fee to contact the website. The FTC notes customers were encouraged to pay $30 for a subscription, so they could contest their jerk status. Jerk profiles appeared in search engine results, which made people who found themselves on the website even more alarmed, since others would see the negative profile when looking them up.

Jerk.com gave visitors the impression that other Facebook users had created mean-spirited profiles about them, which gave them a compelling reason to shell out for the premium access and discover who was dissing them. In some cases, this was true—other people had written the mean statements. The FTC alleges that Fanning and the Jerk.com team created most of the profiles themselves, taking photos and information from Facebook to make it look like other people were assessing each others’ jerk levels. To create the profiles, the FTC says Jerk.com built apps using Facebook’s API that downloaded user information. Facebook started cooperating with the FTC on the case after sending Jerk.com a cease-and-desist letter in 2012.

Jerk.com is now shuttered, but this week, the FTC charged its operators with harvesting information from Facebook, and for deceiving website visitors. The FTC’s case will come before a judge on Jan. 27, 2015.

It’s easy to see Jerk.com as a villain here. “In today’s interconnected world, people are especially concerned about their reputation online, and this deceptive scheme was a brazen attempt to exploit those concerns,” Jessica Rich, Director of the FTC’s Bureau of Consumer Protection, said in a statement. On the surface, it appears Jerk.com preyed on Facebook users’ worries that people were mocking them in a money-making scheme.

But Jerk.com has a defense strategy up its sleeve: making Facebook look like the real villain. Maria Crimi Speth, a lawyer for Fanning and his website, told Boston.com that everything the website took from Facebook was publicly available—and that they were as dismayed as users were.

“We were equally horrified to discover that Facebook is placing personal information from its users including name, and photographs in the pubic domain without requiring any agreement to its terms of service where anyone can acquire it,” she told Boston.com via email. “Most users don’t know this is happening.”

“It’s certainly about time that the FTC finally agrees with us and will clamp down on Facebook for what is clearly a unfair and deceptive practice that the Facebook founder has been exploiting for a very long time,” she continued.

So, basically, the Jerk.com team is going to argue that they’re not the jerks—Facebook is, for making user information readily available. Speth didn’t elaborate on what the defense strategy will be, but Jerk.com will likely paint itself as a tool for exposing Facebook’s privacy issues and argue that the Jerk profiles were an arbitrary or meaningless gimmick designed to draw attention to Facebook’s problems.

The criterion for jerkiness remains a mystery—it’s not clear why certain people wound up on Jerk.com and others were spared the Jerk experience.