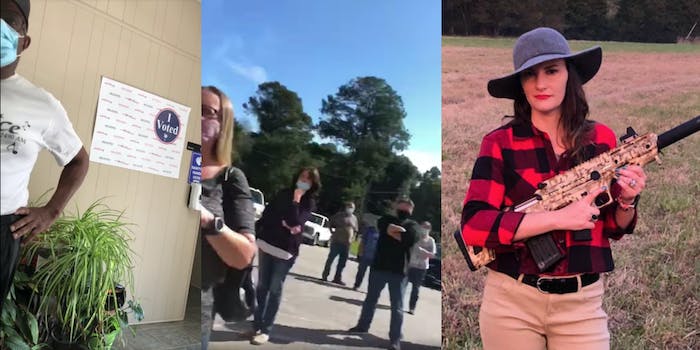 The conservative accuses the poll worker of treating her like she's 'some sort of disease.'

A Republican candidate in South Carolina stirred controversy online this week after recording herself harassing an election worker who offered her a mask.

The incident began on Monday when Jennifer Brecheisen, who is currently running for a seat in the South Carolina House of Representatives, refused to cover her face while inside a voting office.

Although it is legal to vote without a mask, a Chester County elections worker responded by clearing out the building while Brecheisen and her husband voted in an effort to protect other voters.

After casting her vote, Brecheisen confronted the poll worker, 69-year-old Earl Moore, and accused him of “bullying.”

“That was rude to me,” Brecheisen said to Moore. “You cleared out the whole building like I’m some sort of disease. I’m not a disease.”

The video, posted to Brecheisen’s Facebook page, has received a wide-range of reactions.

Supporters of Brecheisen applauded the candidate for refusing to wear a mask.

“I stand with you Jennifer,” one man said. “I sent this to my friend in the SC State House. This is getting ridiculous.”

But others pushed back on Brecheisen, calling her childish and selfish.

“Wear a mask, ya selfish jerk,” another user said.

In a statement to the Post and Courier, Moore defended his actions as an attempt to protect the public.

“We’re in a closed room with a lot of people in it, and I’ve got somebody refusing to wear a mask,” Moore said. “Why should I take the risk of her infecting other people?”

Brecheisen told the paper that even though she has “a series of health conditions” that make her significantly more vulnerable to COVID-19, she refuses to wear a mask because she wants “to be able to breathe.”

Brecheisen is not expected to defeat Democratic state Rep. Annie McDaniel of Winnsboro in the upcoming election.