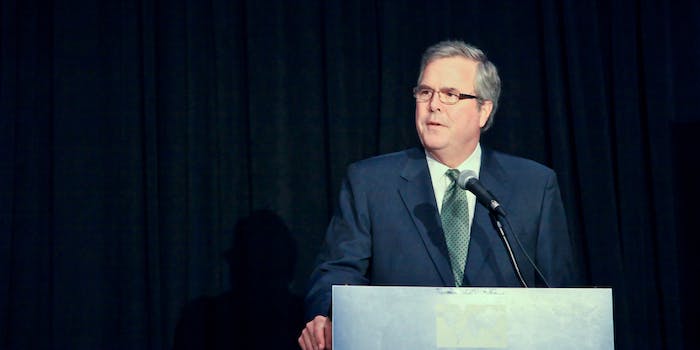 Jeb Bush thinks the FBI should have access to your smartphone

“[Encryption] makes it harder for the American government to do its job while protecting civil liberties to make sure evildoers aren’t in our midst,” Bush argued at a national security event in South Carolina on Tuesday, reports the Associated Press. He also expressed interest in pursuing “a new arrangement with Silicon Valley in this regard.”

Both Apple and Google’s mobile operating systems—iOS and Android, respectively—encrypt users’ devices by default. Neither companies have access to the encryption keys needed to unlock a user’s smartphone or tablet, making it impossible for the firms to abide by law enforcement requests for user data.

“It was a mistake to repeal the metadata provisions of the Patriot Act, which took place this last year.”

Bush, a former governor of Florida and one of the leading 2016 Republican candidates for president, joined the growing battles in Washington, D.C. over both NSA spying and encryption with positions that largely match up with his brother, former President George W. Bush.

“It was a mistake to repeal the metadata provisions of the Patriot Act, which took place this last year,” Jeb said at an Iowa event last week. “There isn’t any evidence that I can find, and I’ve talked to a lot of people to assure that this is the case, that civil liberties were violated, that people’s privacy was violated.”

Bush’s position on encryption lines up with FBI Director James Comey who has been leading the charge in the U.S. for banning strong encryption and mandating government backdoors for easy access.

Largely in response to increased public concerns over privacy, huge tech companies like Google and Apple are offering more encrypted services than ever before, putting data beyond the reach of hackers, thieves, and governments.

Last week, Bush spoke specifically about opposing the end of Section 215 of the Patriot Act, which he said was “part of a strategy to identify terrorists” that led to getting subpoenas from secret courts in order to act on that intelligence.

Even admitting that that he had no specific evidence about the value of the 215 program during its 14 year reign as Florida’s governor, Bush said the expansive NSA powers were worth the civil liberties trade off “if you take it in concert with all the other tools in the toolbox.”

“I mean none of these things by themselves matter,” Bush said, “but taken in concert, it has kept our country safer than if we hadn’t had these tools.”