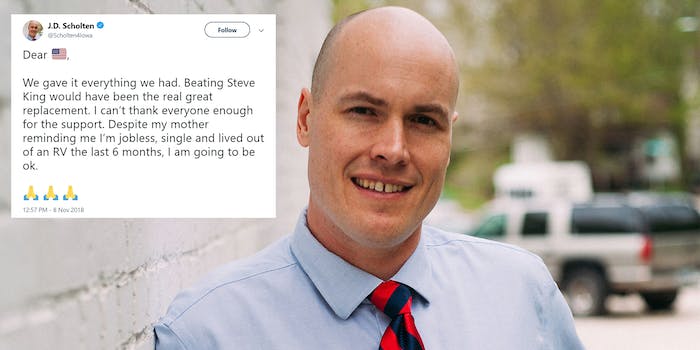 Schoulten may have lost the race, but he won hearts.

In an emoji-filled tweet, J.D. Scholten, the Democratic challenger to Steve King in Iowa’s 4th Congressional district, conceded the seat to King.

“We gave it everything we had. Beating Steve King would have been the real great replacement. I can’t thank everyone enough for the support. Despite my mother reminding me I’m jobless, single and lived out of an RV the last 6 months, I am going to be ok.”

Scholten lost the race by about 2,500 votes, a much slimmer margin than King had ever faced during previous congressional races.

Scholten tweeted his message on Thursday afternoon, taking a jab at King’s noted racist rhetoric. “Beating Steve King would have been the real great replacement,” he wrote, referring to King’s belief in the so-called “great replacement,” the idea that immigrants are replacing white populations in European countries.

Scholten also joked about his mother reminding him he’s “jobless, single, and lived out an RV the last 6 months.”

But it appears he’ll be fine, as many of the replies were offers for dates and homes.

Meanwhile let's help him get a job, a date and a place to live. Winter is coming across the frozen steppes of Orange Iowa.

Single by choice? cuz I think we can work on that pic.twitter.com/Hbk3CY917g

Whether we’ll hear more from Scholten on the political stage remains to be seen, but he certainly would have been a more relatable, less racist representative.

King is notorious for racist statements and for his close relationships with white supremacists and neo-Nazis. In August, King did an interview with a website that has ties to Austria’s far-right political party, just after visiting Holocaust memorial sites.

He also tweeted a racist question to a Latina constituent, blew up at a voter who called him out over his anti-immigration stance, promoted his white nationalist stance on Twitter, and got owned by teens after tweeting about his gun control stance.

King has served in Congress since 2004.