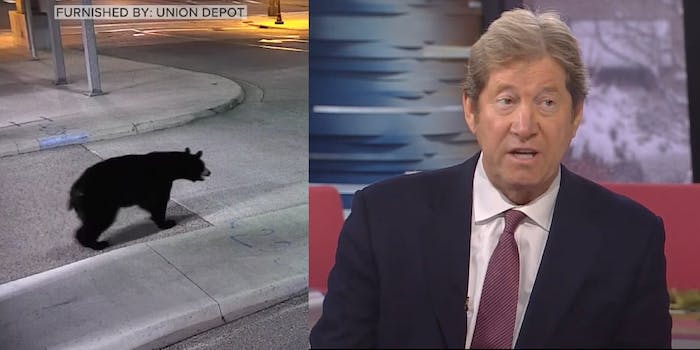 That's not really how it works.

Jason Lewis, a former congressman and current senatorial candidate, tried to make a case against defunding the police by pointing to a wild bear roaming the streets in St. Paul, Minnesota.

“But by all means, let’s abolish the police! Would love to see a ‘social worker’ take care of this one,” Lewis, a Republican running to unseat incumbent Sen. Tina Smith (D-Minn.), wrote in response to a news article about a black bear that was caught by surveillance video wandering into a parking garage. The bear has reportedly since been removed from the city.

“I was wondering why Animal Control was trending and it’s because someone more dense than a cheesecake proposed that cops are meant to handle wild bears,” one Twitter user wrote.

People were shocked to learn Lewis is a former congressman. “My God. You’re a former Congressman. They really need to raise the qualification requirements,” another wrote.

Animal control began to trend, as many began pointing out that the entity would be the one to call in the event of wildlife on the loose in a residential area. “Hi! I am from an actual rural area with bears and everything. We don’t call the police for wild animals. You call a game warden, or animal control, or whatever it’s called in your municipality. And they don’t even kill the bears. It’s wild,” one noted. Minneapolis’ animal control site even states one should only call 911 in the event of an animal attack.

And if police departments are defunded and reformed, more resources would be presumably reallocated to services such as animal control.

“The U.S. spends a tiny amount on social services compared to other nations. Abolitionists say that jobs like responding to people in crisis and taking statements should be given to experts in different areas, rather than to heavily-armed jacks-of-all-trades. Traffic wardens, justices of the peace, social workers, animal control officers… these jobs exist, and it’s weird that we ask barely-trained cops to try to perform all of them,” Matt Baume writes on what it defunding the Seattle Police Department would look like.

This story has been updated to include a comment from the St. Paul Police Department.