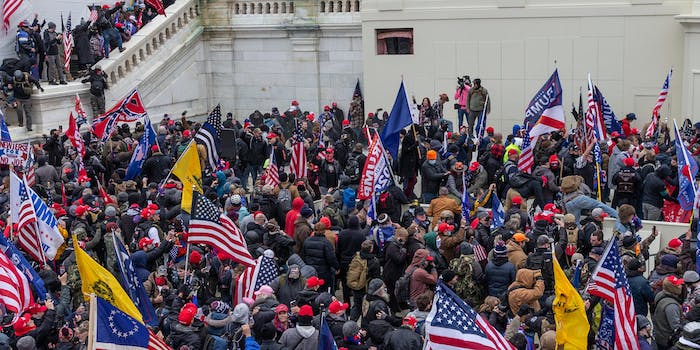 Ray Epps has been at the center of a conspiracy since even before the riot happened.

Almost immediately after the Capitol riot unfolded, supporters of President Donald Trump attempted to deflect the blame for their incursion into Congress. They chose to pin the violence that day on left-wing agitators and undercover federal officers, despite all evidence pointing right back to them.

The most popular person to come under suspicion was a man named Ray Epps, whom a number of far-right media figures and conspiracy theorists decided was a federal informant and a plant that day, encouraging Trump fans to commit acts of violence they did not want to do.

On Tuesday, though, Congress’ January 6th Committee announced they’d interviewed Epps and said that despite the conspiratorial discourse, he is not a secret government agent.

“The Select Committee is aware of unsupported claims that Ray Epps was an FBI informant based on the fact that he was on the FBI Wanted list and then was removed from that list without being charged,” the committee wrote on Twitter. “The Committee has interviewed Epps. Epps informed us that he was not employed by, working with, or acting at the direction of any law enforcement agency on Jan 5th or 6th or at any other time, & that he has never been an informant for the FBI or any other law enforcement agency.”

Much of the speculation around Epps stems from video of him on Jan. 5, where he cheered on Trump supporters and encouraged them to storm the Capitol. Epps was also seen at the Capitol grounds on Jan. 6, speaking to a man who was subsequently arrested for assaulting a police officer.

That Epps wasn’t arrested while a number of Jan. 6 rioters are currently in jail has led prominent far-right voices to say that Epps was working with the government, trying to provoke Trump supporters to commit violence in an attempt to make what they say was a largely peaceful protest look bad.

And while the January 6th Committee says that Epps has no ties to law enforcement, the pronouncement, coming from an official government channel, was met with some skepticism.

In the committee’s statement, it does not address why Epps may have been removed from the FBI’s wanted list.