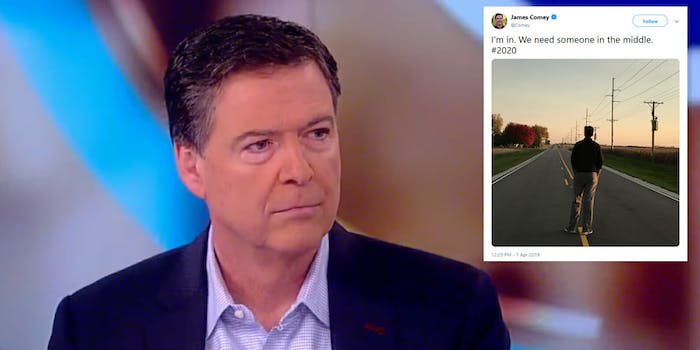 Former FBI Director James Comey appeared to join countless other people who made bad April Fools’ Day jokes on Twitter on Monday, implying that he was running in the 2020 presidential election.

Comey’s Twitter account has long been a place for him to needle President Donald Trump or just comment on the news of the day, but his probable joke about being “in” the 2020 election was not met well with people.

“I’m in. We need someone in the middle. #2020,” Comey wrote as a caption of a photo of him standing (sort of) in the middle of a road looking into the distance.

Predictably, no one thought the tweet was funny. (No one thought Comey’s get-out-the-vote tweet ahead of the midterm elections was worth it either).

i spent my whole day ready for this website to test me. i thought i could withstand anything. then i saw this. https://t.co/MOXwCqGlc0

the three April Fools pranks that should be off-limits are: Pregnancy, Marriage Proposals, and Presidential Candidacies https://t.co/ZBUtG7qdgs

What will it take to convince you that you have zero folk hero status? https://t.co/KFG0LoPO9i

had a violent reaction to this https://t.co/JIay7cJ4jY

Other people pointed out that the former FBI director really likes to post photos of himself staring off into the distance.

JAMES COMEY’S WIFE: Jesus, what are you doing? I’m over here. Look at the camera!

Of course, it’s really just the fact that this tweet was made on April Fools’ Day that made people think it was a joke. It’s entirely possible Comey could run a straight middle-of-the-road campaign.

If Comey does run for president, we expect Howard Schultz’s will-he-won’t-he bid to be a model of what to expect.

Seriously, no one really wants Comey to run for president.