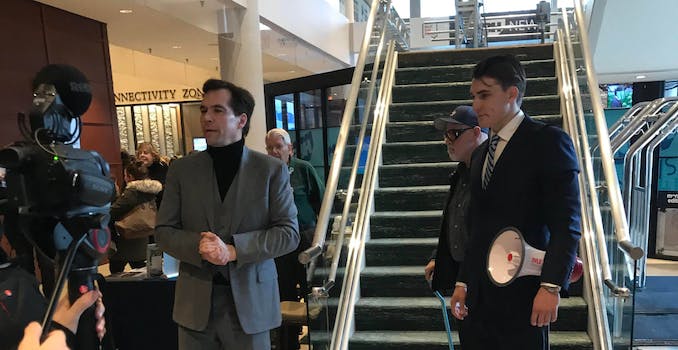 Polls in New Hampshire are only open for a few more hours, closing at 7pm ET Tuesday, but right-wing provocateurs and scam artists Jack Burkman and Jacob Wohl want the entire operation suspended for a week.

Their reasons? The duo, who have falsely accused numerous 2020 Democrats of sexual liaisons, claim to have evidence former Vice President Joe Biden has attended meetings for an “exclusive” Parkinson’s disease support group called “Brothers in Arms.”

There is no evidence online of a group called “Brothers in Arms,” and Biden has never been accused by anyone else of having the disease

Unfortunately for Wohl and Burkman, who have touted their 1599 Project as the exclusive center for 2020 candidate vetting, no one is buying their schtick anymore.

The duo held a press conference at the Doubletree Hotel in Manchester Tuesday afternoon, and though they’ve taken it on the road, no one seems to care anymore.

While their Arlington, Virginia affairs were once well attended by media members who were fascinated by the duo’s ability to repeatedly put their feet in their mouth, Tuesday’s event held in the lobby attracted only a few reporters, as well as left-wing podcast host Chapo Trap House, who filmed the event and asked why Wohl hadn’t yet been nominated for a Pulitzer.

The two’s star witness, a man supposedly named “John Solomon” only mumbled through a few answers and denied being paid by Wohl and Burkman.

He said that he was contacted by a lawyer named “Jim” who put him in touch with the two. Wohl declined to further identify “Jim” or make him available for contact.

Solomon did not answer any questions about either meeting Biden or explain anything about Biden’s “diagnosis.”

Wohl and Burkman, who are more than willing to completely make things up on a lark, said that they had been in contact with New Hampshire Gov. Chris Sununu about suspending the election.

The Daily Dot reached out to the governor’s office over the claims.

“They are scammers. This is 100%, unequivocally false,” the governor’s office said in a statement.

The duo did, however, provide two dozen Dunkin’ Donuts for the assembled crowd, which has become something of a signature of their press conferences.

Why Wohl and Burkman have set their sights on Biden is unknown. Though for a long time he was the Democrats presumptive frontrunner, he fell to a disappointing fourth in Iowa.