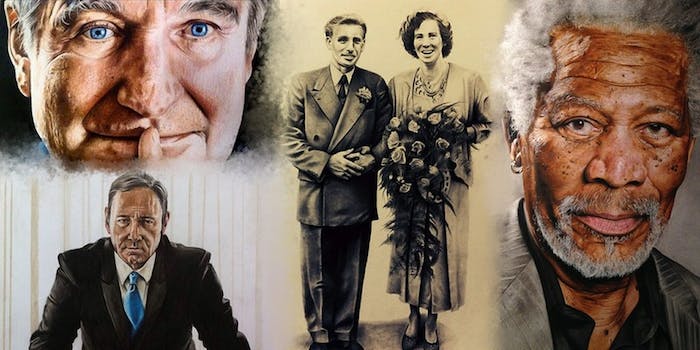 His incredible drawings caught the eye of the parlor's owner.

Every artist wants to be discovered at some point in his or her life. One teenage artist’s big break came sooner than he might have expected thanks to Instagram. After millions of people started following his work on the photo-sharing service, 18-year-old Jack Ede got a job opportunity that let him channel his passion into a job.

Ede, a teenager in the U.K. who creates portraits of celebrities, animals, and everyday people, has almost 100,000 followers on his Instagram account. His sketches range from black and white to colorful portraits, and he was once featured on Instagram’s official blog—in addition, of course, to the company’s own Instagram account, which has almost 50 million followers.

Ede’s art is so impressive that Andy Murphy, the owner of the Iron and Ink tattoo parlor in Stratford, London, reached out to Ede with a job offer.

Though it might seem like Ede’s art career was long in the making, he says he only started taking it seriously three years ago when a teacher told him he had “potential.”

“My parents say I’ve been drawing since I was young and I’ve always enjoyed it,” Ede said in an email interview with the Daily Dot. “Although I didn’t have as much freedom to draw what I wanted to at school so when I decided to drop out, I started taking drawing more seriously and really applying myself.”

Ede dropped out in July after taking his final exams, realizing that going to a university wouldn’t necessarily benefit his career. Turns out, he was right—all it took was a feature on Instagram’s official account to jumpstart his work as a tattoo artist.

Before his serendipitous discovery, Ede was like many other self-employed entrepreneurs: working out of his bedroom studio and taking commissions for portraits and other pieces of work. Considering that he usually works with graphite and colored pencils, the move to needles and ink will be a bit different. But he began his apprenticeship in Denmark this month, and, nine days in, is finding the transition a smooth one.

Ede is relatively new to marketing his work on Instagram. He has had a personal account for the past few years, but it was only about a year ago that he started taking it seriously as a way to distribute his art. His favorite piece, he says, is a large drawing of the actor Morgan Freeman, which was also the one featured on Instagram’s page.

The platform has launched the careers of numerous models, some of whom were discovered organically and others of whom participated in modeling competitions. Other artists draw cultural observations on napkins or sketch intricate cartoons just for fun and receive massive, unexpected attention from the Internet. Many photographers are discovered and celebrated for their ability to use smartphones for far more than crude selfies.

This is part of the reason why Instagram features artists on its homepage and blog: to highlight the talented people using tiny, square photos to distribute their work. Many of the people Instagram discovers are teenagers like Ede, still trying to make their mark on the world, while others are already established artists whose work appears in offline galleries, too.

Although Instagram kickstarted his nascent career, Ede knows that it’s going to take more than sketching in his bedroom in order to achieve his goals.

“There are so many things and so many people that inspire me, the list is endless,” he said. “But what inspires me the most is knowing that literally anything is possible. Knowing that people who used to have nothing now have everything they ever dreamed of purely because they worked hard. That thought makes me work harder every day.”

Photos and artwork via Jack Ede | Remix by Rob Price