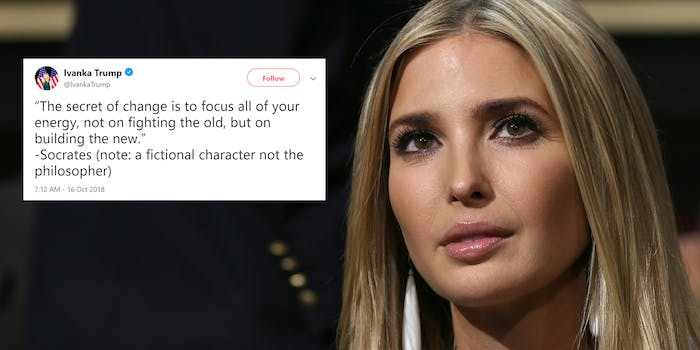 Perhaps all Trump family tweets should come with a disclaimer.

Ivanka Trump has been known to, much like her father before he became president, address the Twitterati in the a.m. with a rise-and-grind quote.

The kind, you know, that shows you are here to sieze the day. Here’s one from a couple months ago:

2:3 “If thou holdest to this, expecting nothing, fearing nothing, but satisfied with thy present activity according to nature… thou wilt live happy. And there is no man who will be able to prevent this.” -Marcus Aurelius, Meditations

The only problem is that some have pointed out her quotes occasionally aren’t real. Trump caused a minor online maelstrom this summer when she posted a quote claiming to be a Chinese proverb that wasn’t at all.

“Those who say it can not be done, should not interrupt those doing it.” -Chinese Proverb

No one could find the actual proverb. It turned out to be a saying that originated in a newspaper in the early 1900s. But now she’s found a way to avoid this same criticism. By posting her quotes with a disclaimer.

“The secret of change is to focus all of your energy, not on fighting the old, but on building the new.”
-Socrates (note: a fictional character not the philosopher)

“The secret of change,” Ivanka writes (dictates? copy-pastes?), “is to focus all of your energy, not on fighting the old, but on building the new.”

“Socrates,” she continues, “(note: a fictional character not the philosopher).”

She’s correct. That is a quote from a character named Socrates in a book, The Way of the Peaceful Warrior, by Dan Millman. It was eventually turned into a movie starring Nick Nolte as Socrates.

Ivanka is right, that if she just wrote Socrates, it would cause an uproar, with people demanding proof that it was an actual quote from the ancient Greek philosopher. But it’s also weird as hell. Why not just say Dan Millman or The Way of the Peaceful Warrior as an attribution?

Who knows, but at least she mentioned it was a fictitious character. When she used this exact same quote earlier, she attributed it to Socrates.

At least she’s knows how to avoid the same drama.