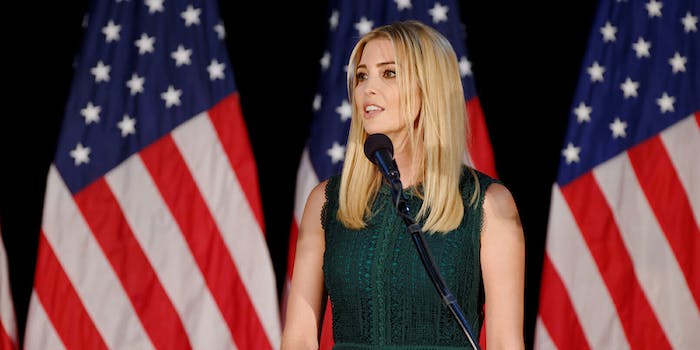 The timing is curious.

Ivanka Trump, the daughter of President Donald Trump, hopped off a call with reporters on Wednesday when asked about Chinese trademarks awarded to her fashion brand, according to reports.

The president’s daughter and Holli Richmond, the director of the White House’s Council on Sports, Fitness, and Nutrition spoke with reporters on background—and when Ivanka was asked about questions surrounding her business and trademarks in China, she declined to answer and a short time later left the call, CBS News reports.

Ivanka Trump is leading a call on a WH event on sports tomorrow. First question is related to her business trademarks in China. WH aide on call declines to answer and redirects. A few q’s later, aide says Ivanka Trump had to go to another meeting.

The murkiness around her fashion trademarks being approved in China come as questions have been raised about timing.

Earlier this week the New York Times reported that Ivanka was awarded seven trademarks in the country around the same time her father spoke out about trying to help ZTE, a Chinese company, from going bankrupt.

Democrats in the House of Representatives demanded an investigation into ethics concerns about the president’s involvement to lift sanctions that were handed to ZTE because his voice of support came days after the Chinese government approved a $500-million loan for a Trump-branded real estate project, according to Rep. David Cicilline (D-R.I.).

The newspaper reported Ivanka’s representatives said nothing was improper about the trademark approvals, adding they were done “in the normal course of business.”

You can read more about the questions being dodged here.