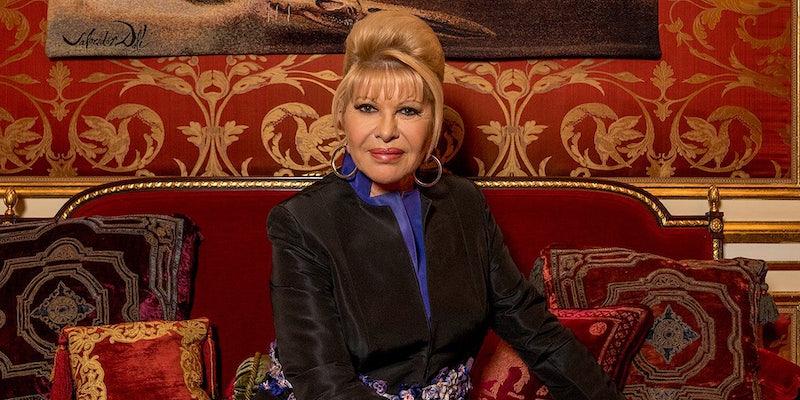 It is a perfect storm for an unceasing conspiracy.

On July 14, Ivana Trump, the first wife of former President Donald Trump, died due to injuries sustained in a fall at her New York City apartment.

At the same time that day, conspiracy theories about Ivana Trump’s death began. They’ve yet to die down, their subject matter and scope effortlessly shifting over time from “Trump had Ivana killed to protect himself” to “Trump had Ivana secretly cremated so he could stuff her casket to the brim with top secret documents.”

Viewing Donald Trump as resistance liberals always have, a criminal mastermind who would do anything to anyone who put him at risk, left-leaning social media accounts immediately declared that Ivana had been #Epsteined, supposedly killed to prevent Donald, Don Jr,. and Eric Trump from giving depositions in a New York state civil investigation.

Unfortunately, that theory didn’t have legs. Just a few weeks later, on Aug. 10, the family gave their depositions and pled the Fifth for every question.

However, that theory dying wasn’t a problem, as a new burgeoning reason why Trump may have needed her dead cropped up.

On August 8, the FBI executed a search warrant at Trump’s Mar-a-Lago residence to look for top secret documents the former president had allegedly absconded with, including some of the most closely guarded intelligence and nuclear secrets possible. The investigation into what Trump did with records from his presidency had been going on since May 2021, but with the FBI now involved, it suddenly went from an archival issue to a criminal matter imperiling the former president.

And as it became clear that a number of documents were missing from their top secret folders, a new question emerged: What better place to put these “lost” records than a casket that you’re having buried on a golf course you own? Wasn’t Trump capable of something as low as hiding classified nuclear information in a coffin to protect himself?

Just like that, the rumor machine started up again, with major liberal accounts tweeting (and many later claiming they were joking) that Ivana’s casket held the missing documents and pointing out “inconsistencies” with the burial, such as the number of pallbearers and the location of Ivana’s burial plot on Trump’s New Jersey golf course.

As part of this deluge of conspiracy theories, a persistent rumor kept popping up—that Ivana’s wood and gold casket wasn’t carrying a body, but her ashes—because she’d secretly been cremated, with a burial done not in her honor, but to hide whatever Trump had inside.

Suddenly, people online were speculating that the FBI should be digging up her grave.

Ivana Trump was buried, not cremated. No reporting from any U.S. news outlet claims she was cremated. Nina Burleigh, a reporter with New York Magazine who chronicled Ivana Trump’s last days—when she was struggling to walk and in terrible pain from a hip injury—spoke to multiple people at the funeral and confirmed that Ivana Trump was, in fact, buried as a whole person, rather than as a pile of ash dusted on top of a Top Secret folder.

“I had three people in the funeral who are not Trumpers tell me what she was wearing in the coffin,” Burleigh told the Daily Dot.

So why did anyone think otherwise? And when did they start thinking it?

The day of the funeral, reports started showing up on foreign news aggregator sites, always without attribution and usually written in choppy English. One, from a Slovakian website posted on July 20 claimed: “it is not yet known whether she will be buried or cremated.” And the same day, a Bulgarian website called Darik News claimed “Former President Donald Trump’s first wife, Ivana Trump, is being cremated in New York City on Wednesday.

The next day, another foreign news aggregator, this time from India, claimed “Ivana Trump was cremated Wednesday at the NYC Catholic Church,” and again, offered no evidence or sourcing.

By the next day, the rumor migrated to Twitter, with a number of low-engagement tweets claiming that Ivana had been cremated, talking about it as if it was common knowledge. But even that wasn’t enough to make the rumor get much traction.

On July 23, the first truly viral tweet alleging Ivana’s cremation started to spread, from New York-based photojournalist Sandi Bachom, who claimed in a reply to another tweet raising suspicions about Ivana actually being dead, saying that “she was cremated and they brought her in a huge gold casket.”

Bachom, who attended the funeral as a member of the press, told the Daily Dot that she wasn’t definitively saying what was in the coffin, only that she’d heard someone in the press area yell something out about Ivana being cremated as the coffin was being carried out.

While one tweet that got less than a hundred shares isn’t always enough to start a viral rumor, left-leaning Twitter accounts were primed by a week of Ivana-related conspiracy theories to believe that the former president would be capable of pulling off a fake burial for his own ends.

More than that, they’d been primed by years of conspiracy theories about a former president who would do anything for himself, even exploit his ex-wife’s death.

The next day, liberal activist Barbara Malmet rhetorically asked her 302,000 Twitter followers “What did Ivana know and when did she know it? Who here has ever heard of an ex wife [sic] tumbling down a flight of stairs only to spill coffee at the bottom, have a speedy autopsy, be cremated, and then buried in a gold casket at her husband’s golf course? This smells like dead fish.”

There was no evidence Ivana “knew” anything about Trump’s legal issues. But that tweet and several others began getting shared hundreds, then thousands of times. By early August there were countless viral tweets alleging that Ivana’s “ashes” had been deposited in a massive coffin for a variety of nefarious reasons.

So when the news of the Mar-a-Lago search and the FBI’s discovery of top secret and classified documents taken by Trump broke on Twitter, it was a perfect candidate to be rolled into the extant conspiracy theory about Ivana’s secret cremation, easily adding new details that the “pallbearers were struggling” with the casket, laden with reams of heavy paper, or that the golf course burial was so that Trump could make sure nobody dug up the “body.”

Conspiracy theorists thought they were on to something.

By Aug. 12, less than a week after the FBI search, Google Trends showed a huge spike in searches for “Ivana cremated” and variations. By then, the rumor that her casket was buried full of documents was now officially a story, written about by numerous outlets and passed around without even a second thought. Different versions had different details: That he’d buried the documents so he could dig them up later, that he’d buried the remains of the documents to prevent them from being found.

As one popular “resistance” Twitter account put it, “Have they exhumed Ivana’s grave yet? What’s buried there? Her ashes? Perhaps some documents? Would you put it past him?”

There was no reporting claiming that Ivana was cremated other than foreign news aggregators and social media rumors. Beyond that, the entire story is full of holes and logical inconsistencies. If Trump had intended to use an empty coffin to dispose of documents, the FBI digging it up would be a trivial matter and instant proof of Trump’s guilt. It would require every witness at the funeral and everyone involved with her burial to be silenced or paid off.

It also assumes that Trump had at least two weeks of foreknowledge about the FBI search of Mar-a-Lago, and was able to use that time to presumably kill and cremate his ex-wife and move these documents all between the death, the burial, and the FBI searching the resort.

But given that the Ivana rumors have been going around and around for close to two months without any evidence, it appears the left is at some kind of crisis point when it comes to believing in conspiracy theories about the former president and his inner circle. In the last few weeks, there have been viral social media threads about Nazi flags at the recent Trump rally (they were photoshopped,) Rep. Marjorie Taylor Greene (R-Ga.) potentially having tried out for American Idol under a fake name (she didn’t), and now Ivana’s secret cremation.

Although two were easily debunked, the accusations about Ivana remain floating around, a chilling reminder that the most sordid conspiracies often have the longest staying power.