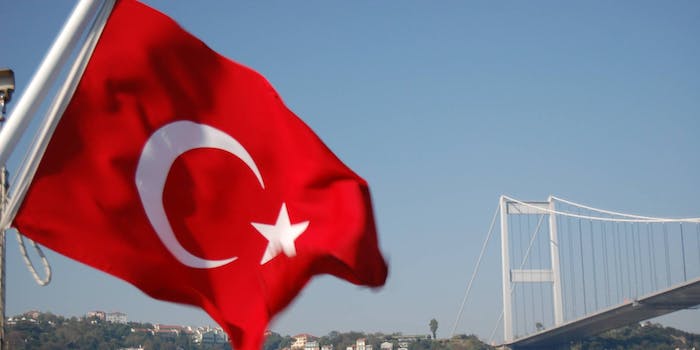 'The attack isn't ours, so we don't talk about it.'

Three gunmen assaulted Terminal 2 at Istanbul Atatürk airport on June 28, killing 44 people and injuring countless more. Journalists and politicians across Turkey as well as the rest of the world have wondered who might have been behind the attack.

Authorities have hunted communist, Islamist, and Kurdish rebels as suspects in a series of bombings that struck Istanbul earlier this year. Now, evidence that ISIS’s leadership in Syria planned the attack alongside militants from Central Asia and Chechnya is emerging.

Less than a thousand miles away in Syria, ISIS fighters know as much about the events in Istanbul as the millions of Turks and Westerners watching the daily news. In fact, they might know less. The Daily Dot contacted several of those fighters through their accounts on Facebook. They discussed extremist-linked killings in Bangladesh yet appeared to ignore the assault on Europe’s third-largest airport.

ISIS has its own production companies and radio stations. The Amaq News Agency, which exists outside ISIS news agencies but works under their tacit approval, is usually the service to deliver claims of responsibility for attacks over Telegram. SITE Intelligence Group, a company that monitors jihadists and white supremacists, translates many of Amaq’s statements on its website. As of this writing, they have translated no messages from Amaq regarding the Atatürk Airport attack.

The Daily Dot messaged Abu Bakr al-Shami, an Iraqi ISIS fighter, after seeing that the majority of his posts cited Amaq rather than one of the official news agencies. He, like two other ISIS members reached by the Daily Dot, blamed the Kurdistan Workers’ Party (PKK). The PKK and its affiliates bombed Istanbul and Ankara, the Turkish capital, earlier this year.

“It [the attack] isn’t ours, so we don’t talk about it,” said al-Shami, who denied knowledge of the assault. “You would cower before them [ISIS leaders] if they announced the explosion, and, as you know, they’re not afraid of anyone because the whole world is against them.”

Informed that the attacks had obvious links to ISIS according to American officials, al-Shami admitted that he and other fighters just repeated what they had heard over social media. “We only know when the news announces whether it was them or not,” he told the Daily Dot. “This information is 100 percent secret.” ISIS fighters have only limited interactions with the leadership.

Other fighters shared al-Shami’s conviction that ISIS had no reason to refrain from claiming the attack if ISIS members had committed it. The militants have already conducted operations against Turkey, ranging from bombing Turkish cities to shelling them from Syria.

Some analysts believe that the militants’ leadership wants to avoid a wider confrontation with Turkey. “ISIS has not claimed any spectacular attacks against the state in Turkey in order to avoid a major domestic crackdown that would threaten its freedom of action as well as its cross-border mobility into Syria,” wrote the Institute for the Study of War. “Moreover, ISIS already accomplishes its objectives in Turkey through spectacular attacks without risking a claim.”

Al-Shami cast doubt on assertions that ISIS fears a wider showdown with Turkey. “We wish that the next explosion will belong to the Islamic State, God willing.”