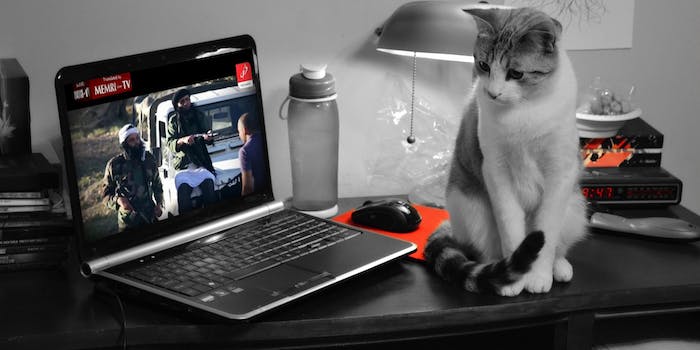 Sometimes laughter is the best defense.

There’s more than one way to win a war.

On Wednesday evening, President Barack Obama laid out his plan to “degrade and ultimately destroy” the Islamic State (ISIS) militants currently terrorizing the Middle East. His plan involves airstrikes on ISIS “wherever they exist,” and the deployment of an additional 475 American military advisors to Iraq.

But if you can fight fire with water, lies with truth, and darkness with light, it stands to reason that comedy is a perfectly good ordnance in the war on terror.

Around the world, Muslims have found creative and sometimes hilarious ways to demoralize, humiliate, and emasculate the jihadi militants of ISIS. Along with irritating the enemy and dispelling its illusion of power, these tactics have an added bonus of combating ISIS’s own propaganda.

A standout example is a Looney Tunes-style cartoon, featuring a “bumbling young militant” who can’t seem to operate his rocket launcher properly. This has unintended consequences for his leader. I don’t want to spoil anything, but the guy wearing the aqua thawb and white keffiyeh looks a lot like this meth-dealing chemistry teacher I met in Albuquerque.

Since this cartoon, which is really about demeaning extremism, has been beamed all across Iraq via satellite, it’s likely more than a few ISIS militants have had to endure watching it.

In Beirut, the tension in the air is thick. Graffiti that warns “The Islamic State is coming” marks the walls of churches in neighborhoods where Lebanese have taken to burning ISIS flags in public—a ritual now widely referred to as the Middle East’s version of the ice bucket challenge.

Lebanon-based journalist Donna Abu-Nasr recently wrote about a band called the Great Departed, whose new hit song, “Madad Baghdadi,” takes aim at ISIS leader Abu Bakr al-Baghdadi. While the satirical quality of the track may get lost in translation, it’s still a great tune, and it’s easy to see how lyrics like “And because we need to reduce traffic, we will blow up human beings” are used to illustrate the brutal ignorance of ISIS militants.

In this live performance (below), recorded in a Beirut music club, you can see the effect mocking ISIS has on the crowd, which should otherwise be justifiably stricken with anxiety: Militants have already kidnapped and murdered people in the country, including civilians like those in the audience.

Twitter users around the world have developed an admirable method for ridiculing bullies by taking the image they wish to portray—invincible and cold-blooded—and paralyzing it with silly pop-culture references. Hashtags, like #ISISmovies, that mash up the names of bands and movies with ISIS messaging are common on the social network and trend often.

It’s like they say, girls just want to have fundamentalism:

#ISISmovies Return of the Jihad

To Kill a mocking Kurd #ISISMovies

the men who don’t just stare at the goats #ISISmovies

No Country for Literate Women #ISISmovies

Last but not least, you can thank the Palestinians for this well-scripted live-action parody, featured recently on the Watan ala Watar show. Again, the militants are depicted as bumbling idiots.

This skit is not without its own political edge, however. It notes, somewhat ironically, that while ISIS has repeatedly killed Muslims and has swept across the Middle East, they’ve carefully avoided engaging with Israel.

Instant classic: “I could have gotten 120 blessings out of him, and now he’s a carcass!” I’m sensing a Weekend at Bernie’s homage just around the corner.