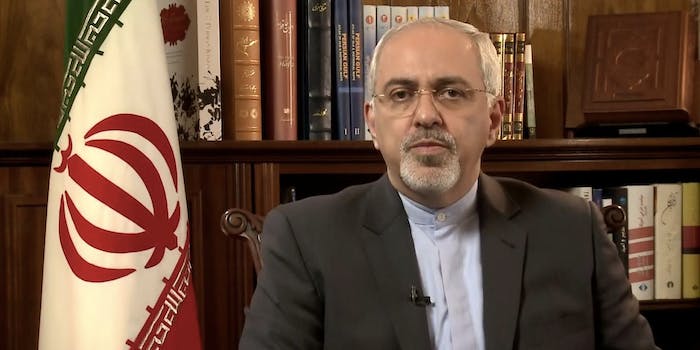 Iran takes its case for nuclear energy to YouTube

Not content with merely negotiating with some of the world’s biggest powers, Iran has a new strategy to acquire international permission for nuclear power.

Just go to YouTube and plead your case to the public.

It’s the first and only video on Zarif’s personal channel (though it’s repeated with subtitles in Turkish, Farsi, Arabic, and French), and it shows him going through a wide range of emotions.

He waxes philosophical: “We’re all endowed with free will,” he says at one point. He gets peaceful and poetic: “nuclear energy is not about joining a club or threatening others. Nuclear energy is about a leap, a jump toward deciding our own destiny.” He also gets confusing: “Rights are not granted. And since they’re not granted, they cannot be seized.”

And he ends the speech with a vague, Bond villain-esque threat: “We promise this to our people and to the world. And we always keep our promises.” He then turns several sheets of paper over, for some reason.

The message isn’t quite so simple to some of the world’s major powers. Representatives from Russia, the U.K., France, Germany, China, and the U.S. met in Geneva Wednesday to discuss the possibility of Iranian nuclear power, which would require the country to be able to enrich uranium, material necessary for a nuclear weapon.