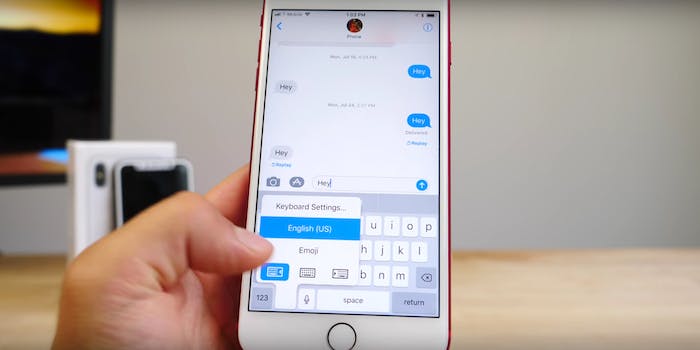 Hundreds of users are reportedly affected.

Remember that ridiculous A [?] autocorrect bug that plagued iOS 11 earlier this month? Well, it’s back, and it’s worse than ever.

Like the previous iOS 11 fail, which turned the word “i” into “A [?],” this new error autocorrects “it” to “I.T.” Numerous iPhone users have taken to social media to complain about how difficult it is to type in iMessage. Needless to say, people are furious.

Does the iPhone autocorrect bug for the “it” drive you mad? I.t is killing me. @Apple please for God sake. pic.twitter.com/vYW3kEPZ3u

I hate iPhone and this garbage i.T bug….

When a user types “it” on their phone, the keyboard will highlight the acronym “I.T” as a QuickType suggestion. Once the user presses the space key, “it” automatically changes to “I.T” without the user selecting a suggested word. Some iPhone owners have also posted screenshots that show the word “is” being auto-filled as “I.S.”

It’s not clear why this issue keeps popping up, but it likely has to do with the algorithms that learn how a user types. If someone previously used the acronym I.T, the keyboard might think that’s what they’re wanting to type when they input “it.” But it appears no matter how many times someone types the word lowercase, it doesn’t override the uppercase suggestion.

The new autocorrect error doesn’t appear to be as widespread as the A [?] bug, though MacRumors claims “at least a few hundred” iPhone users have reported it. It’s affecting iPhone users who have updated their phone to any version of iOS 11. I’m afraid rebooting your phone, factory resetting, or changing its settings will all be in vain. This bug can only be permanently fixed by a future software update from Apple. It took the company about a week to fix the previous autocorrect error, so you should expect a patch to be rolled out soon.

In the meantime, you can use the temporary fix Apple suggested for the A [?] bug. Head over to your settings, select “general,” then “keyboard,” and “text replacement.” From this screen, tap the “+” key and enter “it” as both a phrase and shortcut. If this doesn’t help, you can also just turn off predictive text and autocorrect, though you’ll have to be a bit more careful when you type.

It’s been two months now since iOS 11 was released following a long beta test. It’s time for Apple to get I.Ts shI.T together.