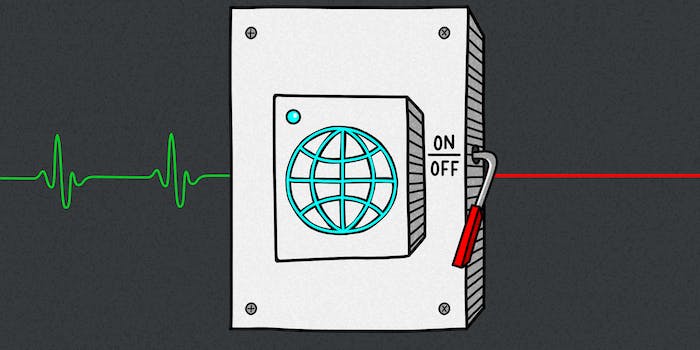 Meet the activists fighting internet shutdowns across the world

The internet is a human right.

In many countries, governments cut internet access to curb freedom of speech and disrupt political dissent or those organizing online without hesitation.

It can be a very effective means of control and is one that some governments are leaning on in an increasingly authoritarian and menacing manner.

With the intrinsic importance of the internet to everyday life and essential technologies across the world, however, shutdowns not only hurt businesses and impede on liberty, but can actually cost lives.

The Daily Dot heard several disturbing stories—from a Cameroonian doctor whose life-saving work depends on access to several software and messaging platforms to a Pakistani woman whose injuries almost proved fatal when she crashed her car during a shutdown—while speaking with Zak Rogoff, a human rights activist who is part of the movement working to lead the international and grassroots fight against it.

What can you tell us about internet shutdowns around the world?

An expert panel convened by the #KeepItOn coalition against internet shutdowns defines them as “intentional disruptions of internet or electronic communications, rendering them inaccessible or effectively unusable, for a specific population or within a location, often to exert control over the flow of information.”

They may completely eliminate internet access, or be limited to specific sites and apps, such as social media.

Shutdowns have been widely condemned by international bodies, including the UN Human Rights Council and the African Commission on Human and Peoples’ Rights.  Nevertheless, the frequency of internet shutdowns is growing rapidly, in a disturbing echo to the meteoric growth in internet use worldwide. Shutdowns happen most frequently in Africa, South Asia, and the Middle East.

Shutdowns threaten the human right to free expression and access to information, and have broad social and economic impacts. We are specifically committed to drawing attention to their health impacts, which have so far been neglected. An internet shutdown would be a problem for health anywhere. But in a country with generally weak infrastructure which relies heavily on mobile communication and international support, it sends the healthcare system into cardiac arrest.

What is the #KeepItOn campaign?

The #KeepitOn campaign is the NGO Access Now’s global campaign against internet shutdowns, consisting of more than 175 organizations from over 66 countries. Since launching in 2016, it has had major victories: together with local activists, it has helped end major shutdowns in Cameroon and Gambia.

In part because of #KeepItOn’s advocacy, many international bodies have condemned shutdowns, including the UN Human Rights Council, 30 governments of the Freedom Online Coalition, the African Commission on Human and Peoples’ Rights, the GSMA (a leading mobile communications industry group), and a group of major internet companies speaking through the Global Network Initiative.

Why do governments implement internet shutdowns?

According to data … shutdowns are most commonly conducted during protests, political instability, elections, and school exams.

In some cases, the shutdowns may be a genuine attempt to protect the public by controlling the flow of false information or incitement to violence, but there is no publicly-available evidence on the efficacy of this strategy. Shutdowns are happening more than they used to because more people are on the internet than ever before, especially in countries without strong protections for civil rights.

How often are they happening?

Across the world, the frequency of shutdowns is increasing as governments learn to use the tactic. The #KeepItOn campaign’s shutdown tracker documented 75 in 2016, 108 in 2017, and 81 before even the first half of 2018 had passed. Regional shutdowns happen on average more than once per week in India, which in August passed its 100th shutdown of the year. In some parts of Africa, they generally happen less frequently, but are somewhat predictable as a government reaction to elections or other tense political moments.

Shutdowns can last for only hours, such as those that the Pakistani government often orders during religious parades, to months, such as the early 2017 shutdown in Cameroon, to years, such as the ongoing shutdown in the Federally Administered Tribal Areas of northwestern Pakistan.

What kind of impact do the shutdowns have on normal people in these countries?

Because people rely on the internet for so many things, shutdowns have broad and deep effects. These can range from disruption to business (annual losses are estimated in the billions) and education, inability to learn about and discuss politics, difficulty maintaining social ties with faraway relatives, trouble accessing information important for safety (such as which areas are affected by violence) and, perhaps most troublingly, problems contacting doctors or emergency services and accessing health information.

In Togo and some other countries, governments have shut down mobile networks without disrupting hard line connections, which are more likely to be accessible to wealthier people. When shutdowns target specific regions within a country, they are often those where a disadvantaged ethnic or linguistic group lives, such as the minority English-speaking region in Cameroon.

Regardless of the geographical area covered by the shutdown, people living in rural, poorer communities have a harder time finding alternative means of accessing services based in cities. There even appear to be gender differences in the impacts of shutdowns: a Kashmiri activist wrote that women in her community rely more on the internet for their social lives than men because their activities outside the house are culturally restricted.

Tell us about how the shutdowns can impact health services.

Most discussion of internet shutdowns has focused on the serious threat they pose to freedom of expression and information or the economic damage they cause, while their impact on health has slipped under the radar.

Compared to the global average, Cameroonian children are almost twice as likely to die before their fifth birthday, according to UNICEF. Cameroonians are attacking the problem with creative uses of technology such as GiftedMom, a locally-developed smartphone app which helps rural mothers find and communicate with faraway doctors, guides them through check-ups and infant vaccinations, and reminds them before each appointment. The app claims 70,000 users and was recognized at the World Economic Forum.

But for three months in 2017, none of that mattered; mothers in Cameroon’s English-speaking regions could not use GiftedMom’s most important features because the central government had blacked out the internet in response to political unrest.

Sometimes internet shutdowns even take out cell phone calling networks, making it impossible to call an ambulance. A woman in Pakistan told #KeepItOn that, after a 2017 car accident, “I took my phone out of my bag to call my family but the network was shut down … I laid there for an hour and because of blood loss I fainted.”

Beyond obstructing formal medical services, shutdowns make it harder for communities to take care of themselves, as they cannot access health information through the Web or use internet-based messaging service to coordinate the care of sick relatives and friends.

In the longer term, shutdowns impede the improvement of medical facilities in the underserved countries that need them most. Medical research and training in the 21st century is difficult without internet access, and doctors cannot base their treatments on the latest evidence if they cannot read it. Shutdowns also prevent data from leaving the affected areas, which threatens projects that must demonstrate their impact to international backers to maintain funding.

Internet shutdowns appear to be undermining the efforts of international donors to support healthcare development. In 2016, India, Pakistan, and Ethiopia received more than $2 billion in direct assistance for health, according to data from the University of Washington. Yet the #KeepItOn coalition has documented that those same countries shut down the internet to sizeable regions 41 times during that year for varying lengths of time. How much of the health aid went to digital equipment or evidence-based medicine training which was unusable during the shutdowns?

What stories can you tell us?

We use the #KeepItOn campaign’s Shutdown Stories project as a resource for personal stories of internet shutdowns, with accounts currently published from Pakistan, Cameroon and Togo. We’d like to share a personal story that happened to one of us, Dr. Mbah, in Cameroon. You’ll see just how a physician’s ability to work is challenged:

It was Friday 19th January 2017. I had just sent my wife a happy birthday message on WhatsApp and informed her I was waiting for a last patient before I rushed home for the party. I often connect with my patients using WhatsApp as well. This time, when I sent my usual reminder message to a patient, it didn’t deliver.  I suspected that the internet shutdown had now hit my number. The shutdown came in a strange way, hitting off numbers and districts one by one. It felt like a bad plague taking out victims one after the other.

When the internet was shut down in Cameroon, my clinical practice and data collection for DHIS 2 (an important dataset for health research and funding decisions) was badly affected. The effect on DHIS 2 is still felt even after internet has been restored.

My clinical practice depends a great deal on real time medical evidence, which is available on different platforms including the Cochrane library, JBI database and EBPraticeNet. I also use WhatsApp to communicate with junior clinicians and send reminders to my patients on taking their drugs, sleeping under mosquito bed nets and their hospital appointments. In addition, I use other mHealth platforms to facilitate safe delivery in my community. To me these had been newfound treasures that greatly helped my work by reducing workload, increasing effectiveness and efficiency and saving lives. In one day all this was shut down. The feeling is hard to describe, but I often feel like it’s similar to the feeling you get if you returned home just to find your house in ashes. It numbed my passion for work and my practice for the first couple of weeks.

The first internet shutdown in 2017 was a complete shutdown and lasted about three months. There were no coping strategies we could think of. The second shutdown was initially complete, then partial, with platforms like WhatsApp and Facebook restricted. We were able to use VPN apps to bypass this shutdown, but not all our patients could. Other health apps seemed to slow down during this time.

What can be done to change the situation? How can people help?

In shutdown-affected countries, activists can pressure the government to stop them, as they have done in Togo, India, Ethiopia, and elsewhere. An exciting example is the documentary Blacked Out, released over the summer by Cameroonians to draw attention to the problem in their country. Even if they wish to remain anonymous, people who are personally affected by shutdowns can tell their story to the #KeepItOn coalition through the Shutdown Stories webform, available in seven languages. These stories inform the coalition’s advocacy and help it fight shutdowns.

Outside of the affected countries, wealthy governments and development funders can make various forms of assistance conditional on governments allowing citizens to exercise their right to communications infrastructure. NGO Internet Sans Frontières (Internet Without Borders) and other members of the #KeepItOn coalition recently called on the International Monetary Fund to consider whether President Paul Biya’s repeated, unjustified internet shutdowns violate the terms of the loan.

Health researchers have a particular role to play. In our July publication in the scientific journal Nature, we pointed out the dearth of research scientifically documenting health impacts. We urge global health funders to make this a priority so that the medical impacts of shutdowns can be given the attention they deserve.